In the Italian region of Lascio, and more specifically in the province of Viterbo, we find the Sacred Grove of Bomarzo, also known as the Garden of Monsters. A place where the visitor enters into a world of fantasy, filled with mythological creatures and enormous stone monsters. 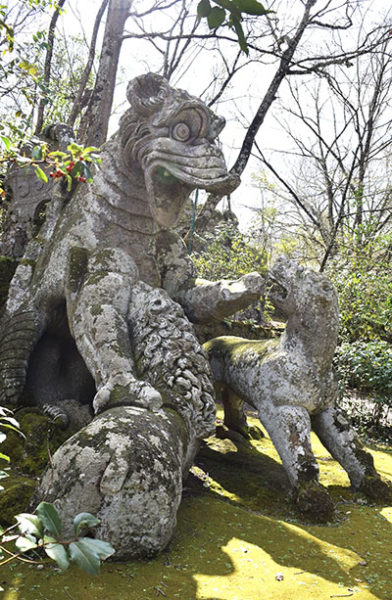 The creation of this monumental park was ordered by prince Viscino Orsini to the architect Pirro Ligorno in 1552, as a proof of the love he professed to Giulia Farnese. The small temple in the middle of this space is, in fact, dedicated to her. If we consider the artistic context of the second half of the Cinquecento, when Italian gardens were built according to a geometrical rationality, adorned with wide terraces, fountains and Mannerist sculptures, we find that the Garden of Monsters falls completely outside this logic. Quite the contrary, if we walk through the intricate paths of the Sacred Grove, we find natural waterfalls supplying water to the many streams that cross the whole park, and how huge rocks, shaped as monsters, giant animals or mythological characters, coming out of nowhere.

However, as it happens with many other natural and cultural heritage stories, after the death of prince Viscino Orisini, the Sacred Grove was abandoned to its own fate for almost four centuries. Its recovery came from the 19th and 20th century intellectual artists such as Claude Lorrain, Johan Wolfgang von Goethe or Salvador Dalí.

The guests to the Garden of Monster must be prepared to enter into a world where the line between what’s real and magic or fantastic is blurred. 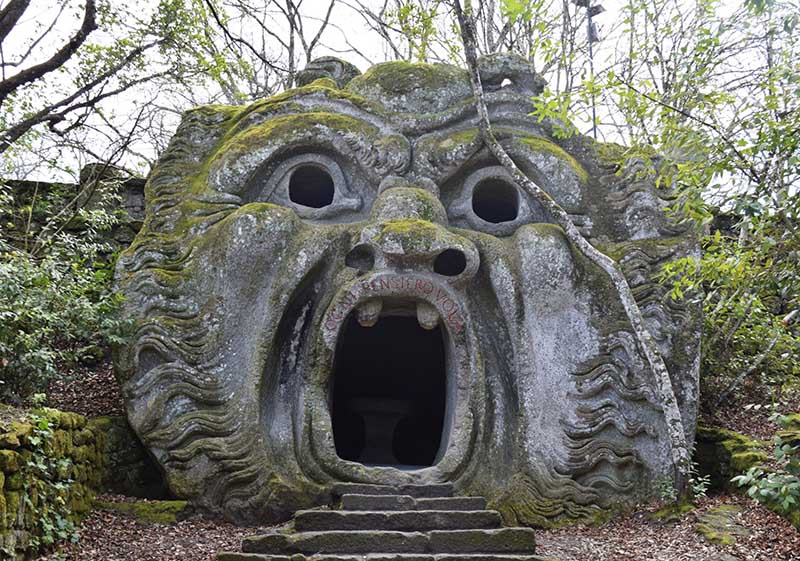 The guests to the Garden of Monster must be prepared to enter into a world where the line between what’s real and magic or fantastic is blurred. A place where nature transports them to distant times and places, inhabited by legendary monsters and buildings where reality is distorted. He will witness first-hand the fight between a gigantic dragon, a lion and a dog, mythological legends such as sphynxes, a winged Pegasus, or Hercules, Caco and Neptune themselves, and he will find out that not everything is as it seems when entering the Leaning House.