The Islamic Culture Foundation (FUNCI), through its Med-O-Med network, just signed an agreement with the City Council of Alcudia de Monteagud, with the aim of collaborating in the development of a Museum of Environmental History. This groundbreaking project is inspired and managed by Juan García Latorre, Doctor in History.

Alcudia de Monteagud is a small town located in the Sierra de Filabres (in the Spanish province of Almeria). It is settled in one of the regions with the highest presence of Berber-Arab toponymy of the whole Andalucia. It is also one of the towns that has best preserved the Medieval Muslim urbanism in the province.

This initiative by the City Council intends to create the firs Museum in Europe –and one of the first ones in the world– dedicated to a new field of research, Environmental History.

This work is a big effort for a town that counts only with 135 registered inhabitants (those actually living there are even less), and that, as many other interior locations, are currently threatened with depopulation. In fact, the Museum is part of an ambitious local plan to revitalize the town, which relies on two pillars: to become a center of cultural promotion, and to recover the regenerative and environmental agriculture practiced by our ancestors.

Environmental history studies the relation of human beings with nature throughout time. In this sense, the Andalusi period is especially relevant, not only for its long historical presence and importance, but also for the lessons it teaches with regard to the current environmental crisis we are living.

The Museum is part of an ambitious local plan to revitalize the town, which relies on two pillars: to become a center of cultural promotion, and to recover the regenerative and environmental agriculture practiced by our ancestors.

The interdisciplinary research that Dr. García Latorre and other researchers have been carrying out for years have shed light on an unknown and fascinating fact[i]. All the periods of big economic and demographic growth that Southeast Iberia has lived since the Bronze Age have led to important environmental changes or even big environmental disasters, except for the Medieval Islamic period. The most impressive thing is that this period experimented the greatest economic and demographic growth of all the pre-industrial period. It is the time when Abderrahman III founded Almeria (apparently, from the Arabic al-mariyya, the watchtower), which grew to become one of the most important cities of all Al-Andalus, as well as an important trade and textile industry center in the Western Mediterranean. 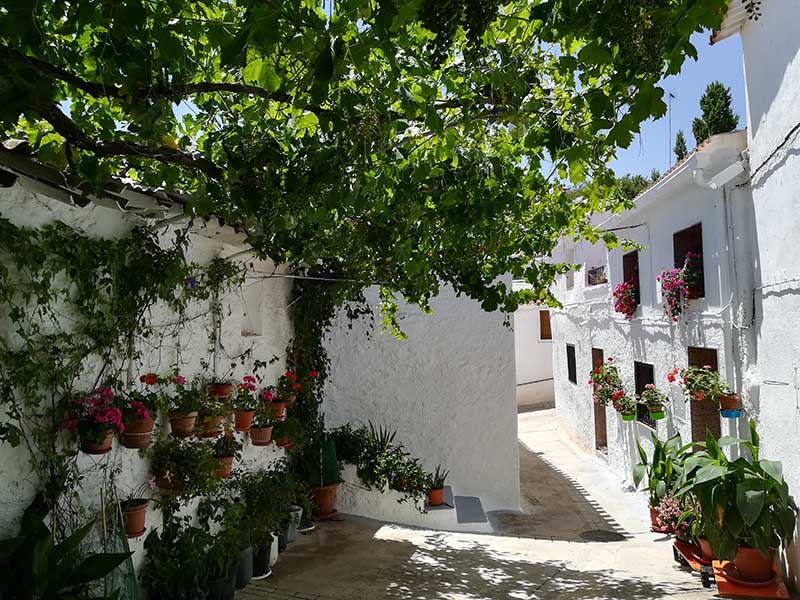 Southeast Iberia is currently the most arid and desert region of Europe. It is not surprising, then, that many desert-inspired films have been filmed there, for instance, Lawrence of Arabia. However, we are finding out that by the end of the long Al-Andalus period, the province of Almeria was covered by big extensions of woods and a surprising forest wildlife. Bears, deer, roe deer, and the mysterious “zebro”, a strange wild horse that became extinct after the Christian conquest, were all found in the region at the time. Ibn Arabi speaks of this animal in a remarkable and moving text from the 13th century that anticipated the modern environmental awareness in its most spiritual dimension: that aiming to establish a fraternal and respectful link between all living things.

How were economic growth and environmental preservation reconciled in Almeria? After many years of research, it seems it was related with the socio-economic structure and the agricultural Andalusi technology. But this conclusion was only reached after a systematic comparison of the Al-Andalus period with the precedent and subsequent periods, from an economic and interdisciplinary perspective, and during long periods of time.

Ibn Arabi speaks of this animal in a remarkable and moving text from the 13th century that anticipated the modern environmental awareness in its most spiritual dimension, that aiming to establish a fraternal and respectful link between all living things.

This comprehensive study will be portrayed in a space that the Museum will devote to the Al-Andalus period. FUNCI will collaborate in the development of content for this block, in collaboration with the project’s technical team. It will also be responsible for counselling in the development of an Andalusi inspired botanical and picturesque garden, given the Foundation’s wide experience in this field. This space, attached to the Museum, will count with an ancient waterwheel in its center, and it will be dedicated to the Al-Andalus’ poets, philosophers and agronomists, such as Ibn Jafaya, Ibn Arabi, and Ibn Luyun, all of whom reflected on the relation between human beings and nature from different perspectives.

The museum, modern and groundbreaking from an architectural perspective (it was designed by architect Mariano Tirado Reyes), will be located in the outskirts of town and it will count with a crystal wall, looking to the mountains, that will allow for the landscape to enter into the building. The construction works have already started and they are expected to finish before the year is over.