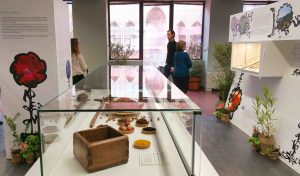 FUNCI’s most symbolic exhibition, Gardens of Al-Andalus, will be shown in Madrid. The exhibition, that has travelled through Spain and several other countries, such as Morocco, Syria, Lebanon, Saudi Arabia and Kuwait, for years, arrives renewed to the Library of the Spanish Agency for International Development Cooperation’s (AECID).

In the event participated Luisa Mora Villarejo, head of the Library, Encarna Gutiérrez, Secretary General of the Islamic Culture Foundation, and Roberto Valera, Director General of Cultural and Scientific Relations of the Aecid. The act opened with Luisa Mora, who presented the different written documents that complement the exhibition, some of them of a very important historical value. She highlighted the ways these reflect the cultural exchange that has taken place throughout the centuries and the important contributions made to today’s landscape by the Hellenic and Arab civilization. Encarna Guitérrez had the chance of explaining the exhibition’s development and goals, the historical claim it makes and the intention of using it as a platform of tolerance that reaches the senses and spirit.

The new miniature has been built by Carlos Naucler, and documented by our collaborators Manuel Casares Porcel and José Tito Rojo, from the University of Granada.

Lastly, Roberto Varela expressed his hope that the exhibition continues to build bridges among cultures, and fighting the unfair image commonly attributed to the majority Muslim countries. 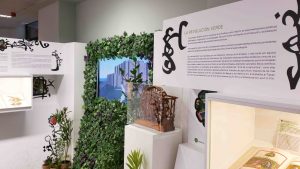 This travelling exhibition, a part of which will arrive to Qatar next April, is part of the project Med-O-Med, cultural landscapes of the Mediterranean and the Middle East, which, currently, comprises a network of 23 countries. Its goal is to contribute to the conservation and promotion of the material and immaterial heritage of the Mediterranean region, as well as to a sustainable development of the most vulnerable population.

The exhibition talks about the green revolution that meant the acclimatization of several vegetable species destined to the pharmacopeia, feeding and ornamentation. 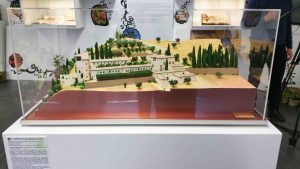 AECID has collaborated with the renovation and update of this famous exhibition, through the construction of a miniature of the almunia of the Generalife, in the Alhambra of Granada, as it was in the year 1526. The Generalife had vast lands destined for orchards, and a residential palace with gardens. Currently, the main garden is the Court of the Main Canal (Patio de la Acequia), dating from the 13th century.

The new miniature has been built by Carlos Naucler, and documented by our collaborators Manuel Casares Porcel and José Tito Rojo, from the University of Granada. 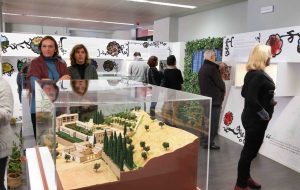 The exhibition Gardens of Al-Andalus shows, through different panels, miniatures, ethnographic objects, audiovisual material and olfactory devices, some of the main Andalusi aromatic products, its landscape, gardens and orchards, as they were in the Middle Age. The exhibition talks about the green revolution that meant the acclimatization of several vegetable species destined to the pharmacopeia, feeding and ornamentation. It also talks about the acclimatisation orchards and gardens –the forerunner of the European botanical gardens–, irrigation and hydraulic infrastructures, the garden from a spiritual perspective, the morphology of the different Andalusi gardens and the Middle Age poetry dedicated to the landscape, the plants and vegetable products.

As stated by the commissioner, Cherif Abderrahman Jah:

“Botanic and landscaping are also useful to dismantle stereotypes and to bring together different cultures, proving that beauty and well-being are a common heritage. This project holds the key to a civilization that loved nature and was really environmentally friendly, a culture in which the search for knowledge and formal harmony were the essence of everyday life”.

A classic exhibition to learn, dream and involve all the senses.