According to the Arab legend, when God created the human being, there were two portions of clay left. With one, he created the dromedary, and with the other one, the date palm. One and the other are miracles in a hostile world in which the wind throws blinding blasts of cold sand, and in which, at night, the cold, after a whole day of burning sun, turns the stones into dust. 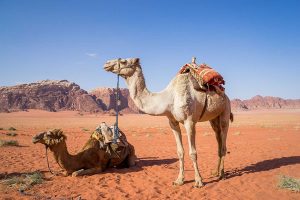 The dromedary, also known as Arab camel (Camelus dromedarius) is originally from the Arabian Peninsula, and is different from the Asian relative (Camelus ferus) in that its hair is shorter and it has just one hump, instead of two. Currently, dromedaries are found not only in the Middle East, but also in the north of Africa, and even in the Canary Islands and other parts of the world.

According to the Arab legend, when God created the human being, there were two portions of clay left. With one, he created the dromedary, and with the other one, the date palm.

There was a time in which distances were measured in “camel journeys”. That’s how it used to be said, such place is ten camel journeys away. Likewise, dromedaries were part of the dowry given to the wife by the husband in the marriage ceremony, and wealth was measured in the amount each one possessed. In former days, caravans could easily reach 100,000 specimens.

A camel is an extraordinary animal. It has been created to resist. If we look at it carefully, we will find out that there is no other animal on Earth that can carry up to 450 kg for days, without water, and eating only thorny shrubs, or even without barely eating. At night, it chews the few food it has eaten, and in the days of scarcity, it can feed from the fat it has massed under its hump.

Contrary to what it is often believed, the dromedary doesn’t accumulate water in its hump. Sometimes it feeds from its fat reserve, to the point that, in times of extreme scarcity, it almost fades away.

Its nose has a musculature that allows the dromedary to open it or close it freely, depending on the amount of sand in the air. In it, it has an extraordinary mucosa that can hold up to a 66% of the air humidity.

The biggest desire of any inhabitant of the desert is to reach an oasis. There, the camel can drink up to 100 liters in 10 minutes. Its stomach, thus, becomes a real deposit that the camel will administrate during its large distances.

There is no animal more loved by an Arab than the camel, with its long eyelashes, that act as a filter or barrier from the sand, its smiling mouth and the oscillating walk, that has earned it the name of “swan of the desert”. Otherwise, in Arabic, camels are called “jamal”, which shares its root with “jamil” or beautiful.

Such is the loved that Arabs have for this animal that, when the governments warned about the “Middle East respiratory syndrome coronavirus”, a social media campaign was launched where people would appear kissing their camels. That way, they intended to demystify the danger that scientists were warning of, and the role the camels had in the transmission of this dangerous disease.

Its nose has a musculature that allows the dromedary to open it or close it freely, depending on the amount of sand in the air. In it, it has an extraordinary mucosa that can hold up to a 66% of the air humidity.

Camels are useful in many ways. Besides being a means of transport through the dessert, their wool is used to create tents, or khaimas, and their milk and meat is consumed dry. 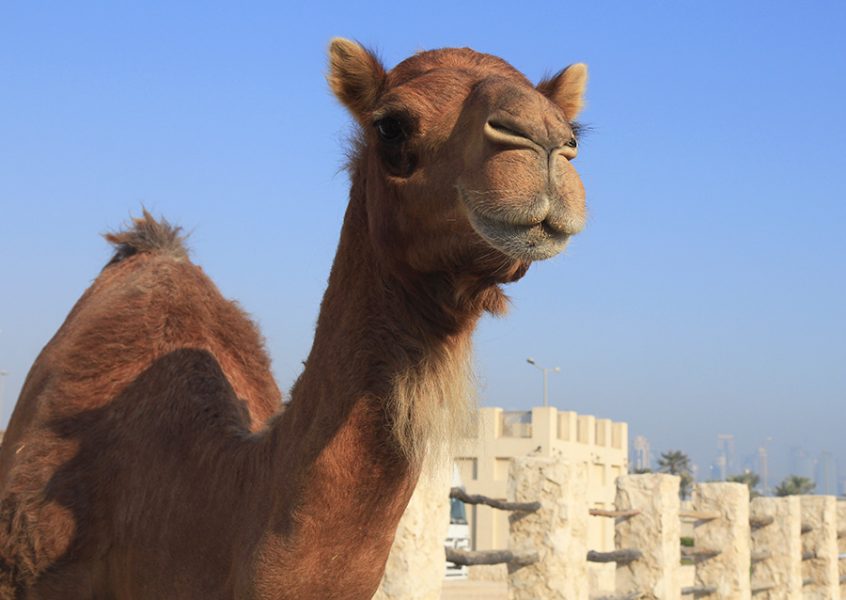 Its perception as an almost sacred animal increased in the times of the Prophet. Its favorite she-camel, Qaswah, of beautiful white hair, was selected to do the Hegira and enter in the city of Medinah after a long pilgrimage. When he arrived, he walked gracefully among the crowd of people, who praised the Prophet and competed to offer him their house. Not wanting to be rude or favor anyone, Muhammad let Qaswash be guided by God and chose of place where to build his new home. And so it did, walking calmly and lying in the place where the Prophet would build its humble house and a mosque for the community of believers.

The Quran mentions this camel in several occasions, showing the degree this animal can reach in the range of creation. 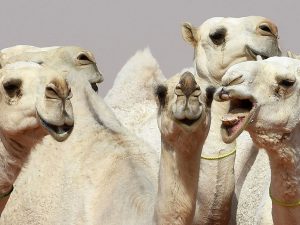 Today, off-road vehicles and the wealth generated by oil have replaced this mammal, essential in Bedouin times. Few caravans carry out long journeys through the desert today, but the love of Arabs for this animal is till alive. Thus, they keep surrounding their lives with it, even if it’s only in a symbolic way.