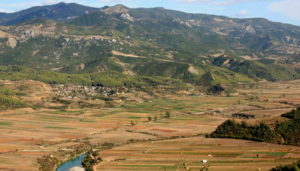 At the end of March 2015, the FUNCI and MEMOLA project (MEditerranean MOuntainous LAndscapes: an historical approach to cultural heritage based on traditional agrosystems) signed a collaboration agreement in order to promote and jointly develop education and awareness raising. This included the exchange of educational tools, knowledge and experience, as well as its dissemination.

MEMOLA project is an interdisciplinary approach to cultural landscapes of Mediterranean mountainous areas, taking as a central axis the historical study of two natural resources essential to the generation of agro-systems: water and soil. The study focuses on four areas: Sierra Nevada (Spain), Monti di Trapani (Italy), Colli Euganei (Italy) and Vjosa Valley (Albania). The project’s aim is to apply an interdisciplinary perspective to the study of the evolution of Mediterranean mountainous cultural landscapes. In the first three areas, the Islamic influence has been very significant. 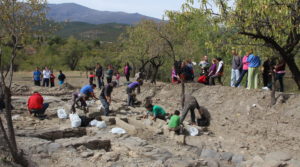 In October and November of 2014, the first archaeological intervention took place at the site of Pizzo Monaci (Custonaci, Trapani). Throughout this activity, four cells and the main entrance of a fortified structure, identified as a possible collective granary from Islamic times (10th-11th centuries), were found. The site is a place of refuge at the top of the calcareous peak of Pizzo Monaco. A first excavation carried out in 2012 confirmed the high research potential of this settlement, which is thought to be a collective fortified granary (aghadir). The importance of this discovery is enormous, as it would represent a unique case in Italy and the most ancient Islamic site of its kind in the western Mediterranean.
The intervention has been an extensive stratigraphic excavation of the aforementioned fortification, in order to confirm the first hypothesis that identified it as an aghadir, trying, at the same time, to carry out an archaeobotanical environmental analysis. The excavation wanted to address some historical characteristics of the Islamic period such as:

The excavation has initially confirmed the hypothesis. MEMOLA project has gathered an important amount of elements, including many soil samples for its archaeobotanical analysis, which will take place in the laboratories of Palermo, Rome and Sheffield.

The activity has also been very successful in terms of social impact. Indeed, the excavation has been visited by several secondary schools of the region and local cultural groups. During the excavation, the professional documentary work Jarafí 2014 has also been filmed.