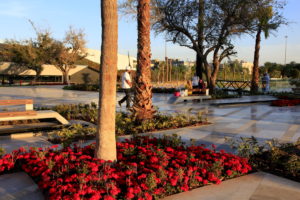 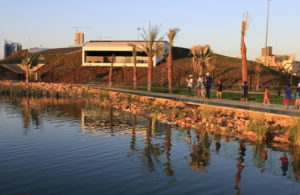 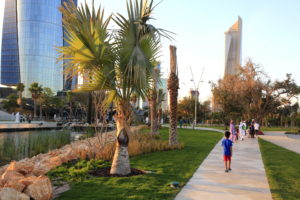 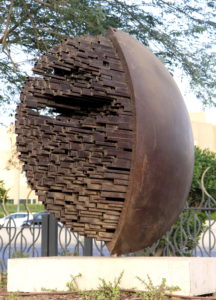 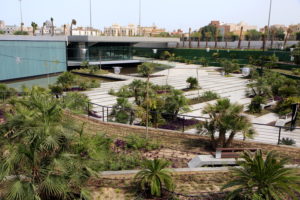 The exhibition “Gardens of Al-Andalus“, showed in Kuwait from the 8th to the 20th April, has given the Islamic Culture Foundation the opportunity of working in the newly opened Al-Shaheed Park (in English, Park of the Martyrs, a name given in remembrance of the victims of the First Gulf War). During this time, the FUNCI did not only have the chance of showing this exhibition, which has had a great reception, it also made new contacts and drafted new projects which will be able to be developed in the frame of the Med-o-Med activities.

Al-Shaheed Park, which opened in March 3rd, has been in the spotlight of the Media due to its innovative concept and design. It might also become one of the main major works of urban development in the MENA region. Its architect is Ricardo Camacho –of Portuguese origin–, who has carried out, through this work, the reconstruction of an old park, developed in the 60s as part of the city’s green belt. The park represents, nowadays, an ecological haven for Kuwait’s population. It will help to reduce pollution and to protect the city against sandstorms. Its plants’ capacity to survive in a weather as harsh as Kuwait’s makes it an example of environmental development.

The park, which is run by the Kuwaiti engineer Haifa Al-Muhanna, has two museums, which are still to be opened: the Habitat museum, which gathers environmental data about Kuwait (flora and fauna, weather…), and the Remembrance museum, which offers a review of Kuwait’s battles and the First Gulf War. There is also a monument to the Constitution, erected to commemorate its 50th anniversary, a Visitor’s Centre, an underground car park, a 12000 m³ lake that will contribute to the park’s irrigation, and an aviary. It also opens its gates to the public at night which allows to see its singular illumination that contrasts with the colorful city skyline.

The park, that will hold the celebration of national events and holidays, is part of a political and social project developed by the Emir’s Office, whose goal is to encourage the population’s presence in public spaces. The park is, therefore, an area of relaxation, open to the whole family, where environmental sustainability, leisure and culture coexist.