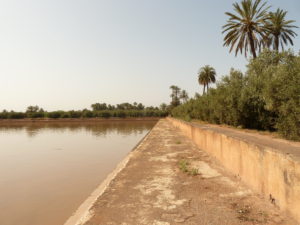 Manuel Casares and José Tito, both teachers of Granada University, members of our scientific support committee and experts on botanical science, have traveled to the Agdal Garden in early April, in order to conduct a botanical campaign, as a part of the rehabilitation project that the Foundation is carrying out within the Med-O-Med program framework.

It is an essential requirement to know the garden flora regarding the future decisions to be assumed related to the actions needed for the project. Moreover, the campaign is a way to ensure that the future interventions will preserve the scientific nature of this space, according to the international legislation. 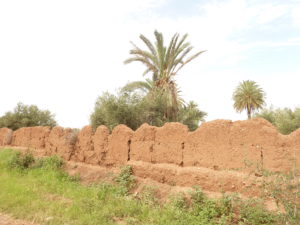 The scientific identification of plants species is very important to potentiate the garden attractiveness. Additionally, an area with typical Moroccan plants or endangered species might be created in visiting areas enriching thereby the surroundings of this huge garden. It has been considered as another important fact, to determine the potential invasive species that could affect the historic or cultural values of the site.

Finally, the relations of the boundaries of the Agdal with the urban surroundings as well as the strengths and weaknesses regarding the landscape perception were also studied. 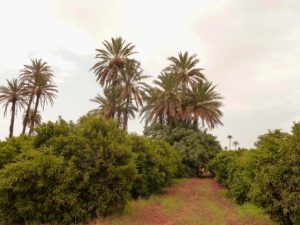 Following different objectives, Antonio Almagro, specialist in Islamic architecture and gardens of the CSIC (Scientific Research Superior Boarding), has recently been in Marrakech developing a study aimed to the collection of data needed for the subsequent drafting of the first restoration project phase.

The data collection has been mainly carried out in Dar-al Hana, a site identified as susceptible to be urgently intervened. Concretely, data have been collected in three places: the pavilion located in the entrance of the site, the wall surrounding it, the retaining wall of the pool inside.

Dr. Almagro has thoroughly developed those tasks supported by Faissal Cherradi in some of them. At the present time and waiting for the next archaeological studies, the experts have started to report a list of operations to include for the delivery of the project.