This itinerant exhibition was organised by the Islamic Culture Foundation (FUNCI) in collaboration with La Caixa Foundation. ‘Andalusian’ culture must be framed in the context of the Islamic civilisation that was developed in the Iberian Peninsula in such a brilliant way over eight centuries (VIII – XV), with the territorial name of Al-Andalus. It was a culture consisting of a mixture of races (Arabs, Bereberes, Hispanic-Romans and Visigoths), and a coexistence of religions (Muslim, Christian and Hebrew) in a climate of mutual tolerance and harmony. Thus, Al-Andalus ended up being the most learned and refined country of its time.

Arts and sciences (poetry, music, philosophy, medicine, mathematics, astronomy…) achieved hitherto unknown levels of sophistication with world-class luminaries such as Ibn Hazm or Averroes (Ibn Rusd). Numerous specialists arrived from Central Europe to the capital of Al-Andalus, Córdoba, to learn these disciplines from their leading specialists, a rich and varied knowledge that would become the basis of the European Renaissance after many centuries.

The refined Andalusian (or Hispanic – Muslim) society, loved nature and gardens, exotic scents and richly spiced foods. This hedonism transpired, particularly, in a special pleasure for meticulous body care and for the cultivation of poetry about  floral topics, as if in an intent of capturing the beauty contemplated in nature itself. 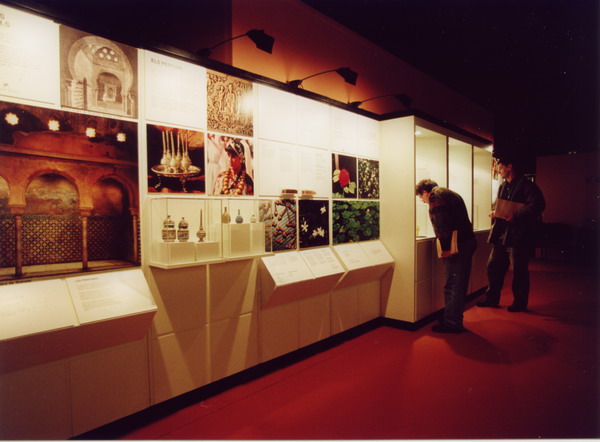 This inclination for aromatic products made everybody in Al-Andalus, regardless of class, like being perfumed and seasoning their food with different condiments. When not produced in Al-Andalus, all these aromatic species had to be brought from the distant East: spices, dyes, plants and resins of scent. The ever-increasing demand for these products in the Islamic world forced them to open up commercial routes towards the countries from where these precious goods originated, mainly India, and the Middle East… through seas, rivers and deserts, the spice traders challenged immense geographic and logistic difficulties. After a thousand vicissitudes, the aromatic products arrived to al-Andalus invading the funduqs (‘alhóndigas’) with the bales of goods that were distributed to the stores of the ‘souks’ after the payment of due taxes.

The palaces, the mosques and the houses of the Hispanic – Muslims were impregnated with the aromas of these products, burning in the embers of their censers or perfuming the sprinkled foods with spicy scents.