This exhibition, organised by the  Islamic  Culture Foundation (FUNCI) in collaboration with La Caixa Foundation, re-creates various locations to give visitors an idea of how science was practised at the time.

From the House of Wisdom (Bayt al-Hikma)  in  Baghdad in the 9th century, veritable neuralgic think tank of the Islamic world at the time, to the diverse seats of learning in Cordova, Denia, Toledo, Zaragoza or Granada, during six centuries Islamic scientific knowledge with a marked Hispanic-Muslim approach laid the foundations for the European Renaissance.

Many sciences reached a high level of perfection in al-Andalus, from the 9th to the 14th centuries. In part, this scientific activity was heir to that of ancient times, both in the Oriental world (China, India and Persia) and the Egyptian and Greek and Roman Mediterranean worlds. But science soon took on a specifically Islamic stamp which was determinant for scientific theories and their subsequent development.

Astronomy, medicine, alchemy, pharmacology, mathematics, hydraulics, botany, agriculture and construction were some of the sciences that spread out from Muslim Spain, exerting their influence and being taught in the rest of the Iberian peninsula and in Europe.

The search of  knowledge

In this exhibition, based on rigorous historical  research, we are going to enter into the very mindset that inspired the brilliant minds responsible for such a golden scientific era in medieval al-Andalus, thus fulfilling the Islamic hadit (axiom) : “Search for knowledge from cradle to grave”. Nevertheless, the scarcity of surviving images and written testimonies chronicling those Andalusian times, forces the modern researcher to explore contextual similarities with other contemporaneous societies of the Islamic world and, essentially, to use ample doses of imagination and conjecture as working hypothesis. 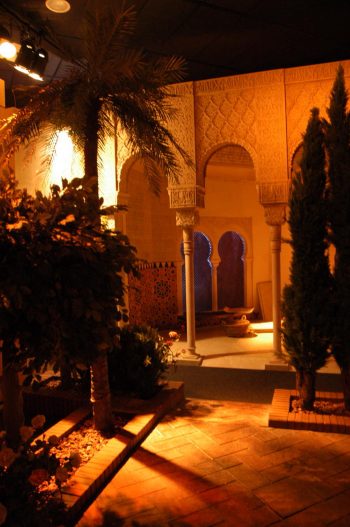 Therefore, we will contemplate the Rich Hall of  Madinat al-Zahra (Cordova) in the city-palace built by the Omeyan caliph Abderrahman the Third (10th century), as a exemplary materialization of the maximum political and social point of development achieved in Muslim Spain. In this great ceremonial hall ambassadors and delegations from all over the world were received by the Caliph. The refinement of the architecture and the displays of mechanical water and mercury fixtures, were the astonishment of courtiers and foreign diplomats.

We will enter an astronomical observatory located in Cordova between the 9th and the 11th centuries, where intricate instruments recently invented or perfected  back then (astrolabes, ecuators, azafeas) are exhibited, along with archaic clocks built with a series of peculiar mechanisms.

We will get into an Alchemist’s laboratory, where   metals were sublimated, sharing space with a Pharmacy in which drugs were elaborated with rare exotic Oriental plants brought in from a nearby botanical garden. We will also see how Abulcasis (10th century) crucially contributed to the development of surgery and other medical techniques, and will marvel at the famous libraries of al-Andalus, veritable havens for erudition. Likewise, we will be able have a stroll outdoors, and see a great mechanical wheel watering a rich orchard of exotic fruit trees (11th to 13th centuries).

And finally, we will be able to walk into the  Alhambra as it was while under construction, to have a closer look at the work of those master builders and their technique with ceramic tiles (13th and 14th centuries).