We are pleased to announce that the Cultural Foundation the “Routes of the Olive Tree” has just joined our Med-O-Med network, Cultural Landscapes of the Mediterranean and the Middle East.

The perfect and timeless union between the Mediterranean and the olive tree.

The olive tree is a tree with a thousand and one legends, which can boast of being, since the origin of the first Mediterranean civilizations, an omnipresent symbol of all cultures, as well as a tree blessed by all peoples. Therefore, the olive tree and the Mediterranean have been inseparably linked since the beginning of time, and its branches have been throughout history an element of union between the two shores of the Mediterranean.

This rich past has left a heritage and a common legacy in the shadow of this tree that covers different fields, such as art, religion, agriculture, commerce, landscapes, health and gastronomy…

Whether in Spain, Tunisia, Italy, Syria, Greece or Turkey, the presence of the olive tree is a visual and historical constant that recalls a common Mediterranean belonging.  To appreciate its importance, it is enough to know that this tree covers more or less 10 million hectares in the countries of the Mediterranean basin, while its presence in four countries – Spain, Italy, Tunisia and Greece – alone represents about 2/3 of the world’s olive-growing area.

These vast extensions of olive trees are not only due to aesthetic reasons, but also to the innumerable virtues of this tree, exploited by mankind for thousands of years. The oil extracted from olives has always been synonymous with wealth and trade. Thus, olive-growing regions have been characterized by an intertwining of ancient and modern techniques and knowledge, which have shaped a know-how and a heritage, both tangible and intangible, of great relevance.

This heritage linked to the olive tree includes a multitude of extraordinary creations, such as oil amphorae, glass lamps, ceramics, perfume vases. It also includes poetic, geoponic, agronomic or culinary texts that have marked and influenced all olive-growing regions. This set of productions is a splendid reflection of the intercultural exchanges and influences that, through trade and migratory routes, have marked and continue to mark our regions and our cultures, as is the case with our favorite dishes.

This common element also unites the three major monotheistic religions, which developed in regions where the olive tree already dominated the plains, as in the case of the sacred lands of Palestine. Thus, this tree, which time does not seem to affect, has an important religious and spiritual symbolism that goes beyond the borders of the Mediterranean world to reach all humanity with a message of peace, unity and harmony with which the olive branch is characterized.

In Islamic culture, for example, the olive tree has both spiritual and metaphorical significance, as illustrated by this excerpt from the Quran:

“The light of Allah, like a bright star , resembles the light shining through the glass of a lantern, fed by the oil of the olive tree – the blessed tree that belongs neither to the East not the West and its oil burns without being burnt: light upon light”

In the Iberian Peninsula the presence of the olive tree is very ancient and is linked to the multicultural history of the territory. According to the Roman analyst Penestrella, the first olive tree was introduced in Hispania in the 6th century BC. C, and according to the geographer Strabo, the oil of Hispania was, at that time, the second most important oil in terms of quality, after that of Italy. 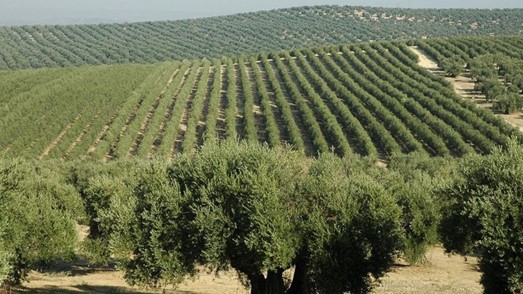 Although the presence of the olive tree and the use of olive oil in the Iberian Peninsula dates back, at least, to Roman times, it was the Muslim populations who extended its cultivation intensively in the Iberian Peninsula during the period of al-Andalus.  After the fall of Rome, the olive tree lost its importance in the territory and it was the Andalusi populations who gave it back its former importance, making al-Andalus once again one of the main olive oil producers in the world.

Numerous chronicles praise the goodness of the oil from Seville’s Aljarafe or from Jaén and the Portuguese Alentejo. In the 11th century, the chronicler Udhri explained, for example, that olive oil “is exported to all places, far and wide… and the highest grade is sent to the most diverse areas and travels to the East by sea“. 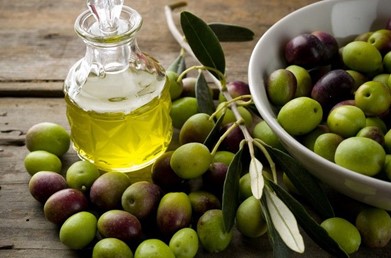 The etymology of the olive itself shows the importance of this Arab-Islamic heritage, since the name of its fruit – aceituna – comes from the Arabic zaytuna, and olive oil “aceite de oliva”)  from the Arabic az-zayt. The Arabic word “almazara“, or extraction mill, also comes, for example, from the Arabic.

As in Roman times, olive oil was highly appreciated, despite being an expensive product. It was used in cooking, cosmetics, pharmacopoeia and lighting, but also in the field of medicine, due to its numerous medicinal properties. Ibn Rushd, better known as Averroes, for example, widely praised its benefits.

We have just seen how this heritage of the Mediterranean world in all its diversity has marked and influenced many areas of the cultural heritage of the Iberian Peninsula. It is doubly important to remember and disseminate this history at a time when division and introverted attitudes seem to take precedence over openness to the world. In this line the olive tree, a symbol that unites us, seems to be of utmost importance. On this occasion, Med-O-Med and the Cultural Foundation “The Routes of the Olive Tree” join forces in order to promote an intercultural dialogue thanks to the olive tree.

It is doubly important to highlight the influence that the olive tree has had on the cultural and natural heritage of the Mediterranean, at a time when division and introverted attitudes seem to take precedence over openness to the world. On this occasion, Med-O-Med and the Cultural Foundation “The Routes of the Olive Tree” join forces in order to promote an intercultural dialogue thanks to the olive tree.

The “Routes of the Olive Tree” are a set of itineraries of intercultural dialogue and sustainable development, complemented by cultural events and various activities around the Mediterranean olive tree. Their objective is to contribute to the sustainable development of these regions through innovative proposals and actions.

The activities that frame the itineraries are implemented by the Network and the Cultural Foundation «Routes of the Olive Tree», a civil non-profit society established in Kalamata, Greece, which, since 2003, has been materializing alternative proposals around the theme of culture, tourism and sustainable development. In this regard, it brings together, develops and promotes the rich cultural heritage of the Mediterranean of the Olive tree through time and space in an imaginative, respectful environment and efficient way. 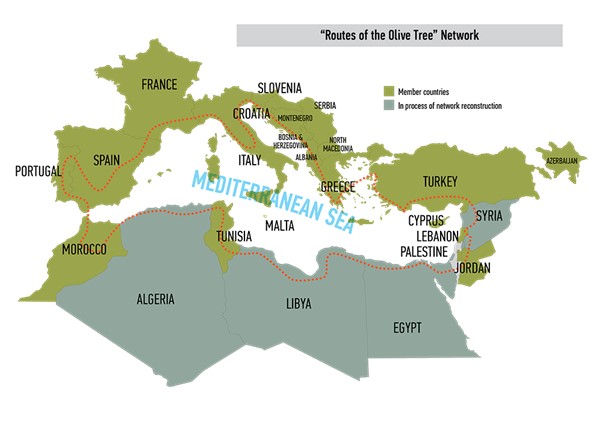 These successful itineraries are framed from exhibitions, cultural and business meetings, social activities, conventions, contests, as well as research and publications around the cultural and natural landscapes of the Mediterranean of the Olive Tree, as history, symbolism, culture and the environment in the olive tree regions.

Currently, the Olive Routes network has more than 200 members, including state and regional economic and cultural development organizations, universities, NGOs, Chambers of Commerce, etc., of which the Islamic Culture Foundation and Med-O-Med are members.

The “Olive Roads” have so far covered 160,000 km for intercultural dialogue in more than 25 countries to record and promote the timeless cultural heritage of the olive tree.

Its action is in line with the UNESCO Universal Declaration on Cultural Diversity and, in particular, Articles 3, 8 and 12, as well as line 14 of its Action Plan: