The academic year 2020-2021 has ended in the School of Gardening Bouregreg Med-O-Med of Salé, Morocco. A project launched with passion and with a social purpose for the qualified professional training in gardening.

This year has been complicated – why deny it – for all of us. Mainly due to the delays generated by the health crisis, and the obligation to give lessons in separate and rotating shifts. And yet, now, under the summer sun, we can say that we are all left with a reassuring feeling. Our first promotion is ready! And the trainees who are about to graduate are carrying out 3-months paid internships, with a formal contract, in some of the best green spaces of Morocco. A source of pride and a way of preparing them for the complicated labor market, far from the comfortable and homey cocon of the School. 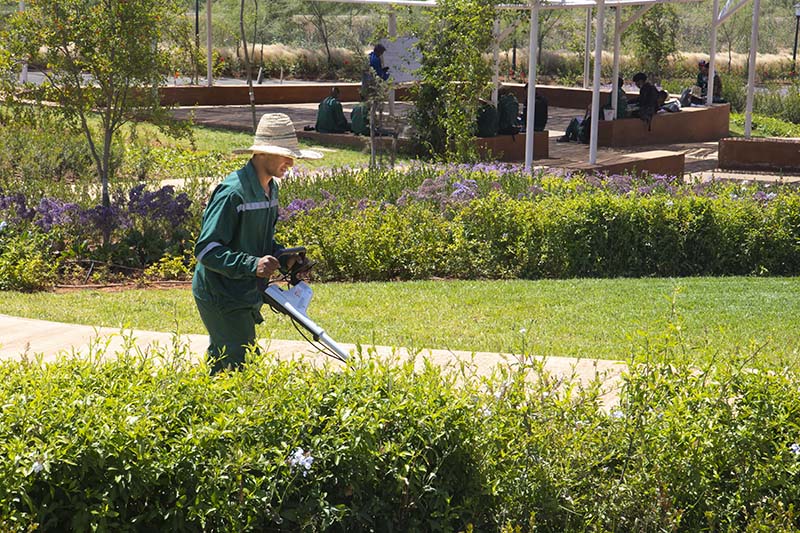 After receiving news on the intention of some of the employers of hiring them after their internships are over, we can say with some satisfaction that the process of job placement has begun and it is giving its first fruits. A real challenge in a field known by the informality and precariousness of its work.

The trainees who are about to graduate are carrying out 3-months paid internships, with a formal contract, in some of the best green spaces of Morocco.

The academic year ended at the end of June, and now the 8 hectares of park look empty and at ease. We miss the trainees, their laughter, their comings and goings, dressed in their green uniforms and wearing their wide straw hats, the noise from the trolleys and the machinery (one of the most loved aspects of the training), and the small daily conflicts that every day-life entails. 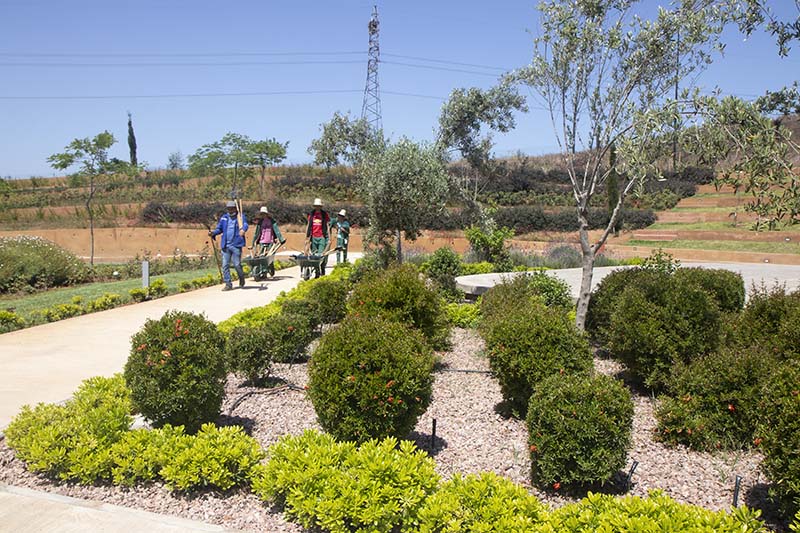 This last semester has been intense, but which isn’t! The high demand of gardening services has taken a lot of time from the last years’ trainers, and they have been overwhelmed with work. However, this fact has also strengthened our learning model, as the students have been forced to face the “real” market, with deadlines, and real technical difficulties.

A second element that has experienced important progress has been the plant production. This is an essential pillar for the project’s environmental and economic sustainability. Pablo, the farmer and biologist, is one of those people who lives through plants, its reproduction patterns, its seeds and physiognomy… In few months he has managed to produced a high number of species, all of which will be sold at the School’s nursery, increasing the School’s income and reducing its dependency from third institutions. For this purpose, we are building a production facility with the aid of the INDH (National Human Development Initiative). The infrastructure is made up of a shade structure (the “magic box”, we call it) and the future building of a nursery. Two expensive but necessary structures, in a place with a mild climate, but with many sunshine and ultraviolet rays hours. 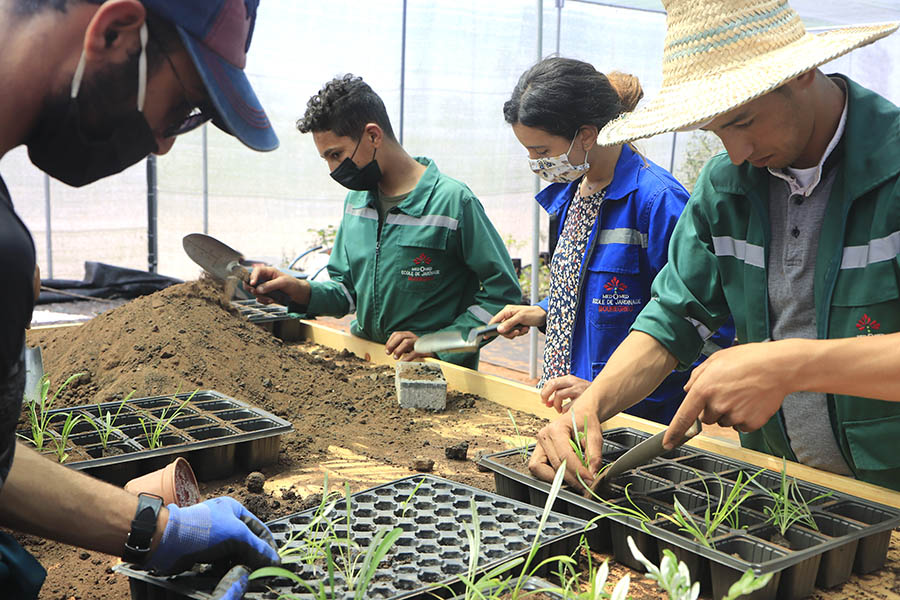 In addition to the species considered interesting from an ornamental or commercial point of view, the production center is also focusing on native and endemic shrubs and tree species, as well as the ex-situ conservation of some important species, such as the Iris tingitana, Narcissus papyraceus or the Limonium mucronatum. We have also received some relevant donations of trees (such as olive trees, carob trees, and other Mediterranean species) from the High Atlas Foundation. The goal of this institution is to promote a sustainable reforestation of the degraded areas of Morocco, and to encourage a responsible agriculture.

A second element that has experienced important progress has been the plant production. This is an essential pillar for the project’s environmental and economic sustainability.

Our aim is for this production work, which will grow exponentially next year, to lead to a new branch of specialization for the trainees, allowing us to have a diversified offer of professionals focusing on the production and gardening with native species that resist climate change and hydric stress. For this purpose, the Fondation Luciole – Institut de France has made an important donation to buy expendable material and to improve the zoning of the irrigation system for the future nursery. 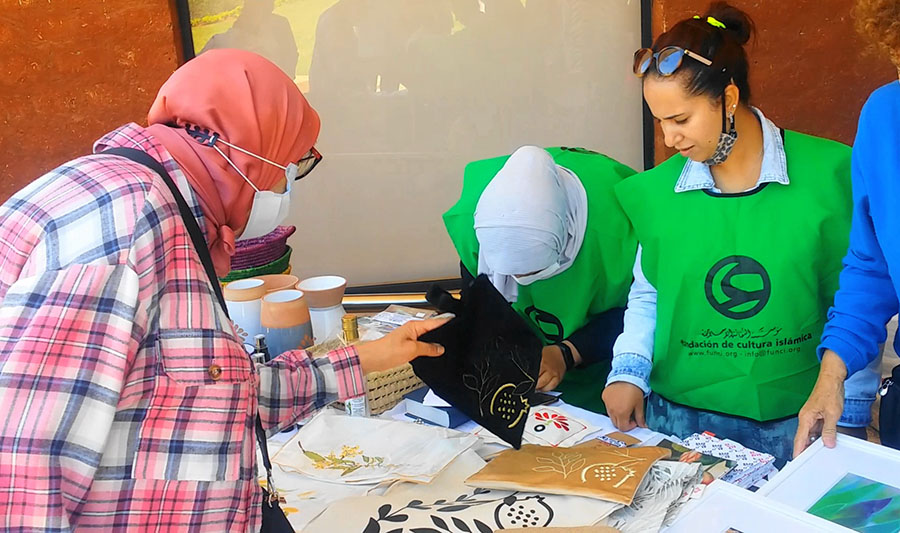 The income-generating activities, essential for the development of the project, are gradually developing, once consolidated the training program. In this light, one of the main achievements accomplished by FUNCI is the adaptation of the training program certified by the Ministry of National Education and Professional Training of Morocco from the 4-years course previously stipulated to a 3-years course. This whas  was possible thanks to the valuable support of Enrique, the head of Training, who did the work of adapting to the new training plan. In addition to this, every year is awarded a Degree certificate endorsed by the Ministry, for those students (luckily, very few of them) who are not able to continue the training due to their personal situations. 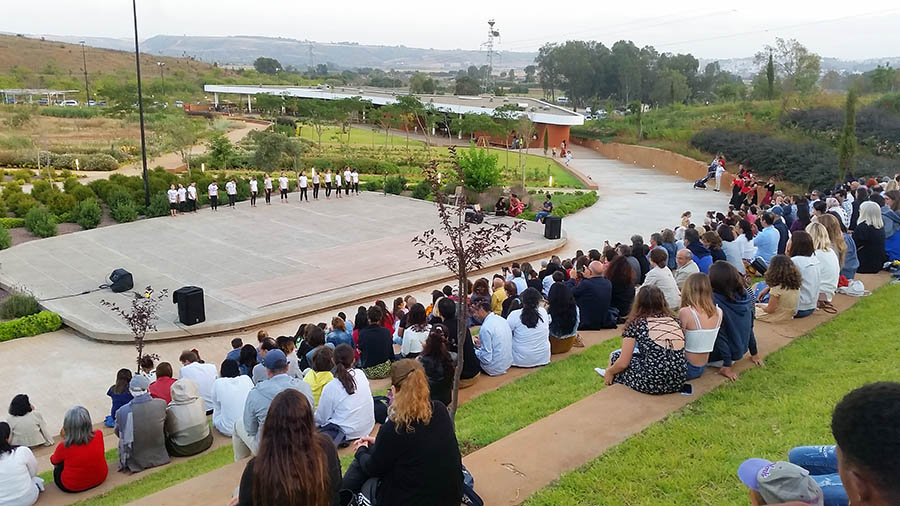 Back to our income-generating activities, this Spring we have launched two highly attended open flea markets, which offered bio products, cosmetic and handmade products. This flea markets allowed for some small local companies and cooperatives to promote their products, in addition to generating some income to the School. We have also launched several workshops and public activities in our amphitheater. The new course – insha allah – will allow us to further develop this essential activity for the sustainability of the School.

This semester we have also signed an agreement with the Belgian association Echos Communication for the recognition of the domestic workers with gardening experience but lacking a degree, through the provision of a certificate by the School. This project counts with the direct aid of the French Embassy in Morocco, for the buying of plants and travelling costs, as well as a generous contribution from the Region of Rabat-Salé-Kénitra for infrastructure and development costs. 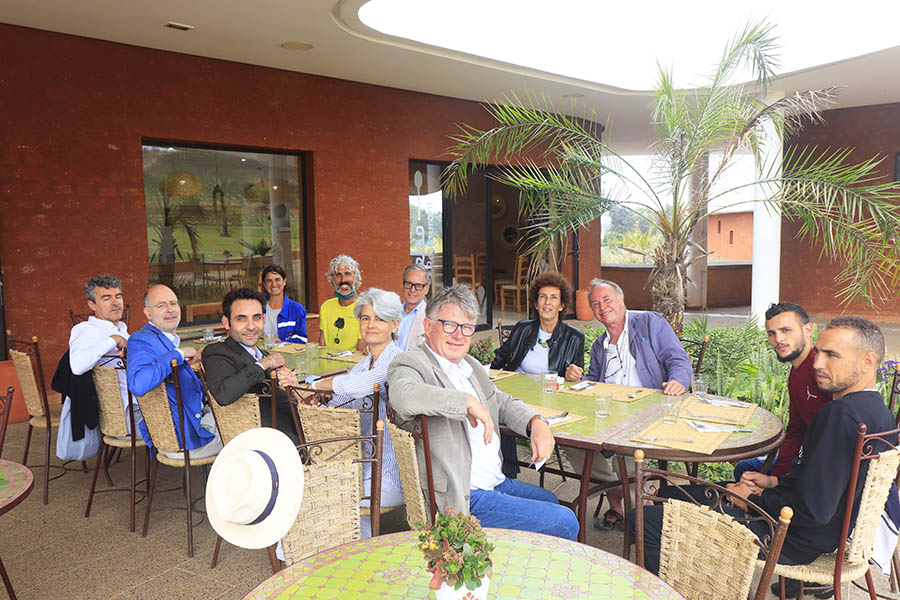 Among other relevant social achievements, we can highlight the hiring of a young gardener with a slight handicap from the Fondation Mohamed V pour les Handicapés. It is the first time that we have signed a formal contract of this type and we certainly hope that it sets a precedent.

The more “festive” note comes from the many visits from people and institutions interested in the School, with whom we have established very promising synergies. Among them, we find the Foundation and Garden Majorelle and the permaculture nursery Palm Orchids, both located in Marrakech, as well as landscaper and writer Umberto Pasti, who is established in the North of Morocco and who carries an extraordinary work of preservation of the threatened local flora.

In addition to the species considered interesting from an ornamental or commercial point of view, the production center is also focusing on native and endemic shrubs and tree species.

These are some of the encouraging news we have from this project, whose main leaders are, unquestionably, the young students who, year after year, we see learn, mature, and evolve towards dignity and self-esteem.

Lastly, a heartfelt “merci” to all the institutions co-funding and collaborating with the Garden Med-O-Med, which have not been mentioned in the article: the AAVB (Agence pour l’Aménagement de la Vallé du Bouregreg), Drosos Foundation and the transport company Alsa Maroc. And, of course, thank you to the School’s administrative and training team for its excellent work!