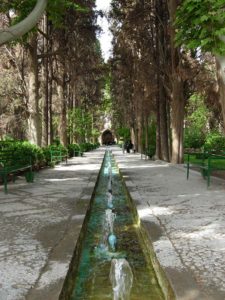 Among Med-O-Med current projects is the compilation and dissemination of an inventory of historic Islamic gardens in the south Mediterranean countries and the Middle East. This week our collaborator Mohammad Motallebi, who is President of the Iranian Society of Landscape Professions and Official Delegate to IFLA in Iran, has sent us the second inventory form, on this occasion on the Fin Garden, after the form we received a couple of months ago on Shazdeh Garden. The information provided has been compiled by his colleague Anoosheh Gohari.

Surrounded by deserts and mountains, Kashan is according to tradition the home town of the Three Wise Men. It enjoys a mild and dry climate with abundant vegetation thanks to several water sources such as Souleiman’s Spring (Salomon). Archaeological finds reveal that this region was one of the main centres of civilization in prehistoric times more than 7.000 years ago. This has led to Kashan and Fin Garden being one of the favourite summer resting places for Iranian rulers throughout centuries.

Fin Garden was designed in its current form during the reign of sah Abbas I the Great (1571-1629) of the Safavid dynasty as a recreational area. Subsequent modifications and additions to the garden structure were undertaken during the Zand and Qajar dynasties due primarily to a devastating earthquake in 1778, even though the arrangement of the fruit orchards and the fountain marble pools maintain its original location. The surrounding high walls and the turquoise colour tiles on the buildings also date back to the 19th century.

With over 6 hectares, Fin Garden includes several buildings, baths, a central pond, fountains and waterways. The predominant vegetation of the area consists mainly of pine and Mediterranean cypress trees. In the past native varieties of banana, granate, fig, greengage and apricot trees were equally abundant. Like other historical Persian gardens, Fin Garden is noteworthy for the large number of elements that take advantage of water, provided by a nearby hill. The water pressure is sufficient so that the fountains and pond do not need any mechanical pump while the water flow is steady and constant over the whole of the year. However, the flush irrigation system in the past has given way today to water pipes.

Fin Garden strikes a contrast between the monotonous, arid and inhospitable landscape outside the walls and the lush foliage within the walls. While outside water is a scarce and precious resource, inside the abundance of water and colours stands out by forming shapes and patterns which remind us of the decorative elements of Persian rugs and tiles. 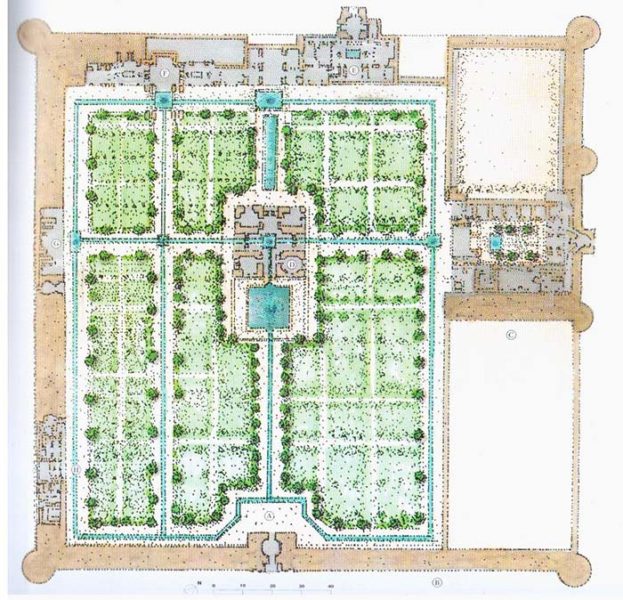 Altogether, this garden is inspired by the classic Persian vision of the Paradise as a system wherein gardening, water and architecture form a unit on the basis of geometric relations. The presence of water stands undoubtedly as a metaphor for the water streams in Paradise mentioned in the Qur’an as well as a symbol of contemplation of the existence. In turn water movement depicts the transience, change and freshness. Probably due to these features the Persian prophet Zoroaster opted to teach his followers in gardens. Nevertheless, we must not forget that the spaces arrangements at Fin Garden correspond to its main use as recreational space, reception and residence for kings, ministers and other high-level officials, as it is shown in poems inspired by this monument and miniatures depicting it. One of the most well-known and dramatic events taken place in the garden was the murder in 1852 of the grand vizier Amir Kabir by an assassin sent by sah Naser al-Din of the Qajar dynasty. 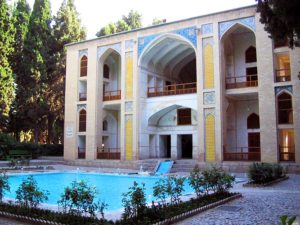 Fin Garden was included in 1935 in the list of Iranian national treasures and this enabled to stem considerable damages in its state of conservation. The Iranian Cultural Heritage, Handicrafts and Tourism Organization is at present the institution responsible for its conservation and management. In 2011 a group of historical Iranian gardens was inscribed on the UNESCO World Heritage List, among them Fin Garden and Shazdeh Garden, under the common name of “The Persian Garden”. Various studies point out that the Persian garden was conceived several centuries BC as symbol of Zoroastrian elements: sky, earth, water, plants and wind. Each of these nine gardens is located in a different province of modern Iran. Each one offers specific solutions adapted to the climatic and landscape conditions and the available materials. In all of them stands out the division in four sections, being water the most important element for irrigation and ornamentation. The art of the Persian garden is the most ancient garden tradition and it has influenced later designs in countries such as Spain or India.