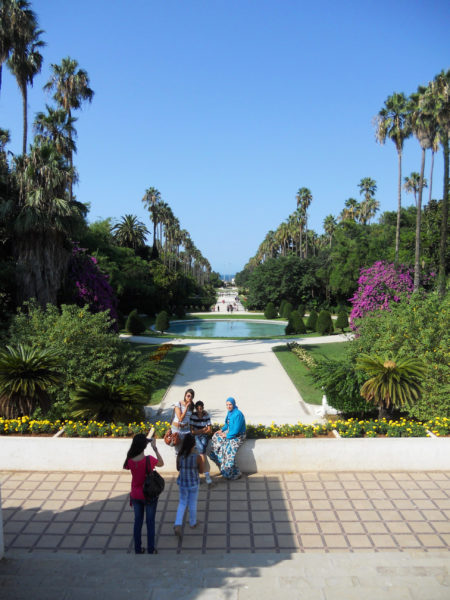 In early August, a FUNCI delegation visited Algeria on his collaboration with Tlemcen, Islamic cultural capital 2011 declared by ISESCO (Islamic Educational Scientific and Cultural Organization). On his way to Algiers, they went to one of the most important botanical gardens in the Mediterranean region, the Jardin d’Essais du Hamma.

This garden with more than 60 hectares was created in the nineteenth century, although its design dates from the twentieth and was conducted by the French architect Reigner. In the garden are located the facilities of the Institut National de la Recherche Agronomique of Algeria. This huge garden of acclimatization, which was the state nursery, was created from what were some unhealthy marshes (the name Hamma means fever in Arabic), and climbs up the hill taking the shape of an amphitheater. It has more than 3,000 different botanical species in its facilities, and its special location on the bay of Algiers, back to the South siroccos, gives a privileged climate and create a beautiful contrast between tropical green and blue Mediterranean, which is perceived in all its breadth from the top. 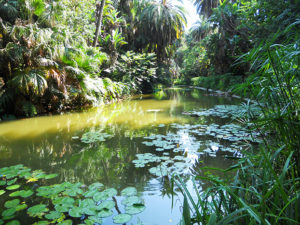 Already in 1867, a few years after its creation, the garden had more than 8,000 species and varieties, among which dominated the economic plants, especially for industrial processes. Thus, we can remark the dye plants such as henna and indigo, those used in the manufacture of textiles like cotton or hemp, and producers of waxes and gums such as Myrica cerifera and Ficus elastic, all being studied and introduced at that time. In addition, it was also cultivated spices, oilseeds like olive trees, castor-oil plant, sunflowers and ornamentals.

Later, the garden went through the hands of various public and private managers, changing its layout and its mission, and left and returned to the investigation depending on the resources available in each period. After the Second World War, having reverted to the Algerian state, the garden takes its  actual character. It was directed by Mazouz Belmehel, but fell back into a serious neglect during the rioting that occurred in Algeria during the 90’s. 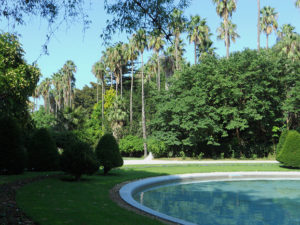 The garden is now the result of a major restoration began in 2004, and was reopened to the public in 2009. He has since received over 400,000 visitors. It has a small zoo, several leisure facilities such as kiosks, school gardening and all types of buildings for study and research. It is divided in several areas, including the French garden, with a spectacular view, staircase and symmetrical that flows into the sea, and the English garden, formed by thick tropical and subtropical forest, ponds, winding, shady paths and sculptures. It is articulated by several avenues: the dragon trees, ficus, bamboos… Otherwise, the Hamma garden is equipped with production nurseries and greenhouses, as well as spaces for acclimatization and investigation of endemic Algerian species. It works also in the in vitro fertilization laboratory and in the seed bank.

A job that has only begun, and is worthy of praise and to become an example for the entire region.