The Akhal-Teke horse is considered the most beautiful equine breed in existence. This is due to their spectacular coat and slender morphology. It is also suitable for a wide variety of equestrian disciplines, excelling especially in endurance races and full riding competitions.

But that’s not all, these horses were the breed of choice for soldiers and kings from Kazakhstan to China. It is even known that Alexander the Great rode a predecessor of the Akhal-Teke in his battles.

Would you like to know a little more about them?

Characteristics of the Akhal-Teke horse 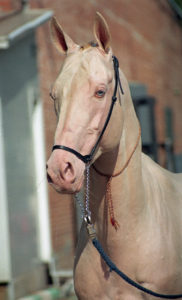 This is a horse of Turkish origin, with a very good racing ability, good movement, a great jumper, and endurance that deserves to be noted. In the 500 km endurance races held in Russia, this breed always came first. Despite this, today it is a breed used mainly for dressage and jumping due to their great potential.

Not much is known about the ancestry and origin of this breed. This fact, together with their striking appearance, has given them the reputation of mystical horses. They are considered one of the oldest breeds in the world, having been bred for centuries by the Teke tribe in the Akhal oasis in the Karakum desert of Turkmenistan. The breed has undergone several name changes, but is still known as “the celestial horse” or “the jewel of Turkmenistan”.

Not much is known about the ancestry and origin of this breed. This fact, together with their striking appearance, has given them the reputation of mystical horses. The breed has undergone several name changes, but is still known as “the celestial horse” or “the jewel of Turkmenistan”.

An animal whose description cannot fail to include the adjectives: svelte and slender.  With a height of around 160 cm in males and 155 cm in females, these are horses with elongated lines. They have a long, slender neck which sometimes has an ‘S’ shape, giving a haughty bearing to the head. The back is long, as are the slim limbs, where the tendons are well marked.

The head is light and fleshy, with large, expressive eyes, and fine long ears set high up. The musculature is rather dense under a very fine skin and an undoubtedly striking coat. The tail and mane are sparsely furred, and there is not usually much hair going towards the face in the form of a fringe.

In character, it is a breed of great courage, loyalty and sensitivity. Its natural nervous temperament was tempered by the Turkmen in order to obtain from this breed all its potential, achieving resistant and strong equines, creating a very close bond between horse and rider.

They are said to be obedient and respectful with the rider, but are difficult to handle when dismounted. 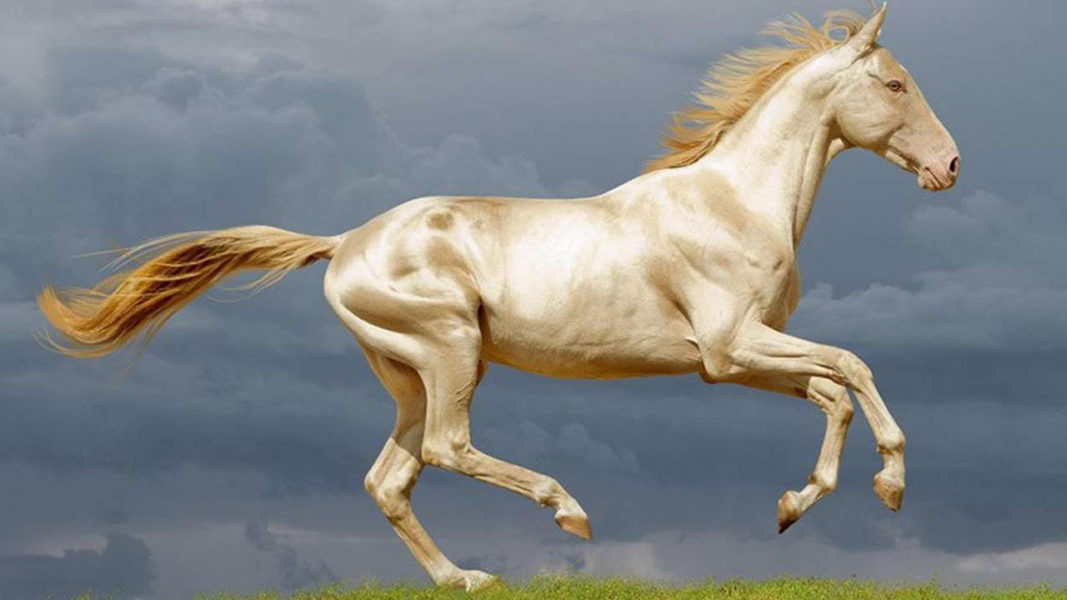 The singular shine of the Akhal-Teke’s coat

Let us now talk about the unique coat of this breed, which is undoubtedly one of the most striking features at first glance. They can have different types of coats: the basic colours, dilute dun and cream, liarts, etc.

Those with cream, palomino or bayo-cream dilute coats usually show a metallic shade which gives them the appearance of having golden body hair. In white horses, grey liarts, perlinas… the same thing happens, but the sensation is of silver hair. This curious effect is due to the fact that the proteins in the coat emit these metallic iridescence when light falls on them. Although dark-coloured horses do not have the same effect, they do have a high glossy coat. This means that the most valued and desired coats are the albinos and cremellas, which have silvery and pearly metallic reflections. And, of course, the palominos with that incredible golden effect given to them by the ‘cream gene’, which is why these animals are known as “the gold-plated horse”.

The palominos [have an] incredible golden effect given to them by the ‘cream gene’, and for which these animals are known as “the gold-plated horse”.

It is said that the first Akhal-Teke to arrive in America had such golden color and belonged to Queen Isabella of Spain. Since then, the breed has become popular in America.

A bit of history

The name Akhal-Teke, comes from the union of the name of a geographical area: Akhal, and the Teke, a Turkmen ethnic group. The origin of this breed seems to be found in the horses that populated this region of Akhal, located in the south of present-day Turkmenistan, some 3000 years ago.

They are believed to have originated from horses brought by the Scythians, who were the first people to master the art of horsemanship.

Turkmen horse-breeding tribes may have inhabited the Altai Mountains before settling in the outskirts of the Kara Kun Desert, Persia, Anatolia and Syria. The equines they bred were known by various names, such as Niseus. The Teke went on expeditions to steal and capture slaves in the South, and used to take two horses per Teke: a purebred for riding and a pack horse. They selected and maintained the lineage of their best horses, which traditionally were never sold.

In the 19th century, the Russian army made its appearance in these lands, annexing Turkmenistan. It was the Russians who began to breed the Akhal-Teke breed in a stud farm.

The Russians called these horses with a curious metallic coat and whose morphology was reminiscent of Turkmen horses from Persia, the ‘argamak’. These horses attracted the attention of the Russian general Kuropatkin, who selected some of these horses to begin breeding them and gave them the current name of the breed: Akhal-Teke.

Today, there are about 8,000 registered Akhal-Tekes in the world. Most of them are registered in Turkmenistan, where they have become a national symbol.

Today, there are about 8,000 registered Akhal-Tekes in the world. Most of them are registered in Turkmenistan, where they have become a national symbol. Despite its good characteristics for equine sport and the fact that it has gradually begun to spread in different countries, it continues to be a rare breed, even scarce.