The dusty Peugeot rumbles along the road, parallel to the ancient aqueduct that once delivered water from the springs of Zaghouan in Tunisia’s Dorsal mountains to ancient Carthage, about 57km north. However, the waters around Zaghouan have long run dry and, if action is not taken soon, so might much of the land around it.

It is not just Zaghouan. “Ninety-five per cent of the [arable] land is in the process of desertification,” explains Sarah Toumi, president and founder of Acacias for All, a social enterprise aimed at checking the descent of Tunisia’s countryside into arid desert. “There is less than 1% of fertile organic material left in the soil, meaning it’s really poor and can easily become desert. By 2030, it will all become a desert if we do nothing.”

Desertification is not exclusive to Tunisia. According to the International Fund for Agriculture Development, no continent, excluding Antarctica, is immune from the combined effects of intensive modern farming, dwindling fresh water supplies and rising temperatures, all of which can reduce fertile soil to desert. However, Africa, containing 37% of the world’s arid zones, and Asia, with 33%, are at acute risk.

For post-revolutionary Tunisia, racked by social tension, high unemployment and an underperforming economy, the agricultural sector is vital, accounting for 14% of the country’s GDP and employing 20% of its workforce.

Within Tunisia, desertification assumes different forms, ranging from the gradual encroachment of the Sahara from the country’s south, to the depletion of the land’s natural resources through over-farming in its north. On each front, Acacias for All is part of the pushback, helping local women form agricultural collectives that will allow them to plant new crops, such as the pea-like acacias that give the social enterprise its name.

For Toumi, who shares French and Tunisian nationality, the personal preceded the national. Six years ago, when she saw her grandparents’ date farm near the coastal city of Sfax succumbing to the effects of desertification, she fell back on the experience gained from her networking with environmental students in Paris. “In the beginning no one believed in me, except a few of the women. So, I started a crowdfunding campaign that raised €3,000 (£2,670). I used this to create a nursery to grow the acacia trees, which the women then agreed to plant.”

“There is less than 1% of fertile organic material left in the soil, meaning [Tunisia’s soil] is really poor and can easily become desert. By 2030, it will all become a desert if we do nothing.”

Now, in addition to growing acacias, Toumi’s team is involved in promoting a return to Tunisia’s environmentally neutral indigenous rose crop, as well as orchestrating the production of other crops including moringa, olives, almonds.

None of the new crops need artificial fertilisers and all, when fermented and mulched after harvesting, will help renew the soil that bore them. Acacias for All now has about 300 farmers across Tunisia participating in schemes that will help reverse the degradation of the soil that once provided imperial Rome with much of its bread basket.

An environment and social development project

For the women participating in Acacias for All’s work, the proposition is simple. In return for planting the new crops, the social enterprise will provide the trees, the training to grow and harvest them, and guarantee that whatever is produced will be sold in the shops with which Toumi and her five-strong team have negotiated contracts. Once established, the cooperative structure allows the women to buy further crops, the equipment to farm them and, critically, gain the financial independence that comes from participating in a successful business. 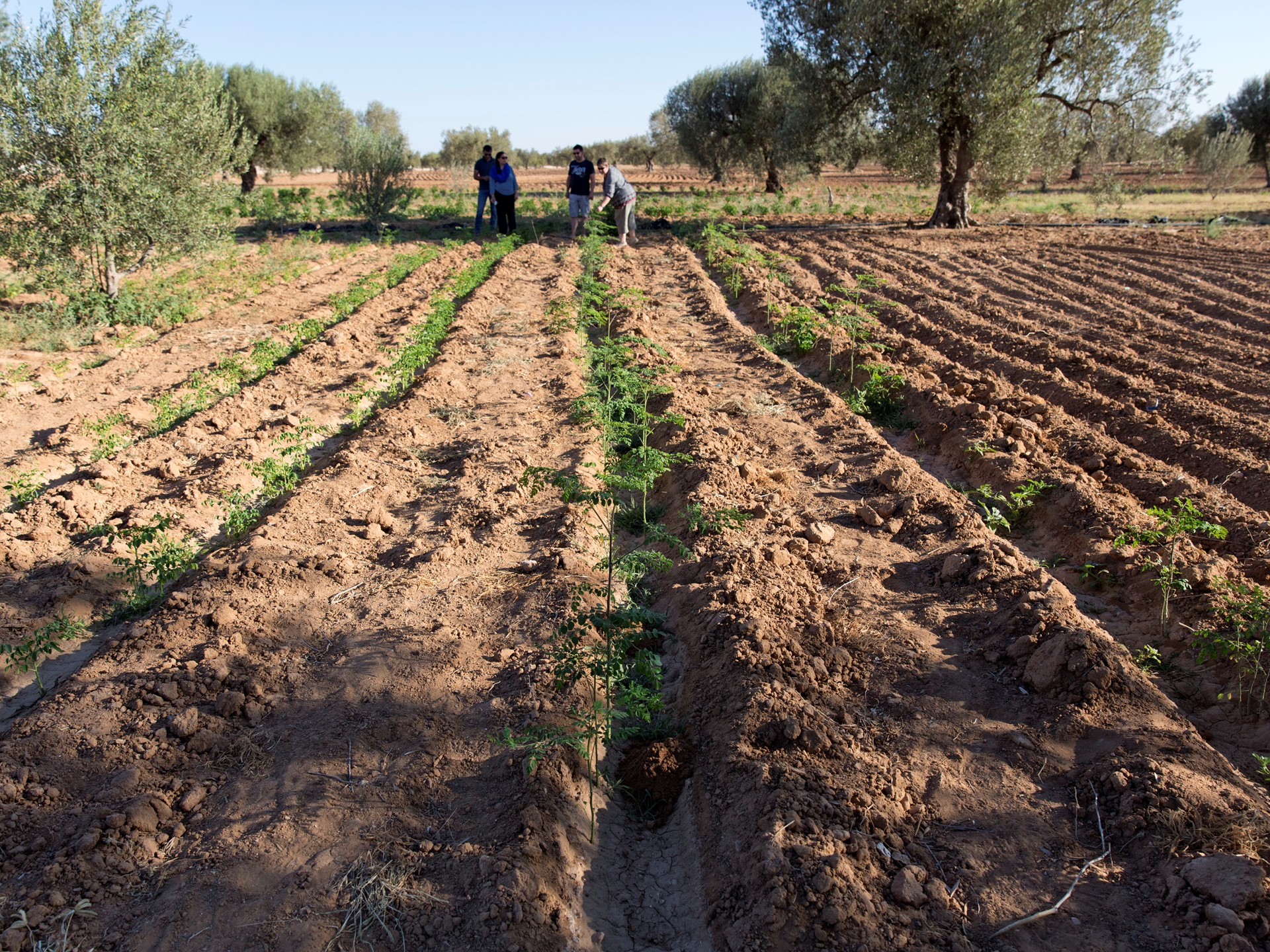 In Zaghouan, Nejia Ben Zeid, a retired vet, is president of Acacias for All’s local cooperative and the owner of about 1,300 olive trees near El Fahs, a few miles outside Zaghouan. Acacias for All’s presence in the area is largely down to Ben Zeid, who, after hearing Toumi speak at an agricultural conference, pursued her till she agreed to visit the region.

“I liked the innovative approach of Acacias for All and the idea of introducing new crops that don’t need a lot of water,” Ben Zeid explained through an interpreter. “The idea of a contract was also appealing. I liked the idea that I would get a fixed price for whatever I grew. This is true for everyone in the cooperative.”

For the women participating in Acacias for All’s work, the proposition is simple. In return for planting the new crops, the social enterprise will provide the trees, the training to grow and harvest them, and guarantee that whatever is produced will be sold in the shops with which Toumi and her five-strong team have negotiated contracts.

In the olive groves of El Fahs, Ben Zeid, Toumi and her team are joined by another farmer, Naima Jabali. As the storm clouds gather ominously, they inspect the small, weed-like patches of emerging moringa that had been planted in August as a test. In time, they hope the moringa will thrive in the long gaps between the olive trees, its roots anchoring the topsoil against the winds that blow through the area.

Jabali’s farm is a few miles off. She is also taking part in the pilot programme. In the past, she explains, she handed over whatever she grew to her husband, so that he could sell it. Now it goes back into the cooperative. “I knew about desertification,” says Jabili. “If the land isn’t worked properly, it decays. We’re all farmers. We know this.”

Named by Forbes as one of its “30 under 30” entrepreneurs in 2016, and recently appointed to the Presidential Council for Africa initiative by French president Emmanuel Macron, Toumi’s ambitions remain undimmed. “I want to plant a million trees by 2018. The environment brings everything together – the economy, agriculture and women’s rights. It’s all there.”