Lebanon, Algeria, Italy, Greece, Turkey… the entire Mediterranean basin region was plagued by unprecedented wildfires this summer, and this episode may be the preamble to an even darker future. Indeed, in its 6th report, published on Monday 9 August, the IPCC (Intergovernmental Panel on Climate Change) emphasizes the vulnerability of the region to the risk of fire, reinforced, of course, by global warming.

The Mediterranean basin is the world’s region that will suffer the most from rising temperatures, the 500-million-population region is termed as a “climate change hotspot” by this report. In fact, in the Middle East and North Africa, the risk of death of elderly people due to heat waves could be multiplied by three to thirty by 2100, while the surface area of fires would increase by 40% in the Mediterranean basin in case of a warming of 2°C, as reported by the IPCC.

Beyond this risk, and this link with global warming, we consider it important to emphasize the local initiatives of some regions that are at the heart of the fight against fires. Fights that take place both to protect cities and villages, as well as important natural areas inhabited by many plant and animal species. 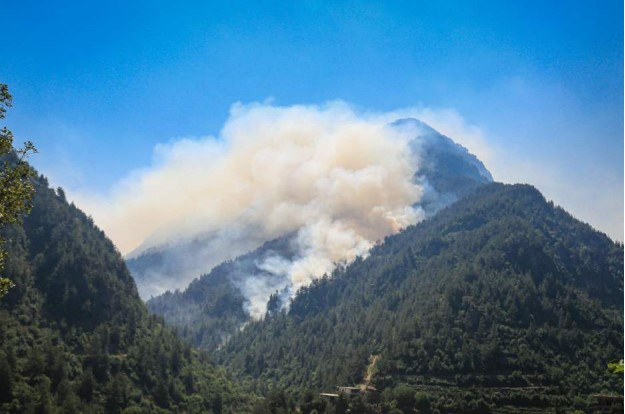 Moreover, the first affected and the first victims are the often rural areas, often suffering from the lack of public investment in many sectors, including firefighting.

In the context of these issues, we would like to focus on the example of Lebanon and the work of an association that fought against the flames all this summer despite its limited means, Akkar Trail.

Beyond this risk, and this link with global warming, we consider it important to emphasize the local initiatives of some regions that are at the heart of the fight against fires.

The case of North Lebanon

Lebanese forests -many of which are internationally recognized and protected natural areas- suffer serious damage and loss of biodiversity every year due to the numerous forest fires. This problem, more and more recurrent over the years, has, unfortunately, led to a considerable decrease in vegetation and forest cover in the country, whose emblem is none other than the Cedar tree.

In fact, between the years 2020 and 2021, the fire-season – which becomes longer and longer as time goes by- has destroyed more than 3,000 hectares in Akkar governorate (Lebanon’s Northernmost governorate) alone, most of which are forested areas that provide natural habitat for many wildlife, birds and insects, as well as residents’ farmland.

In other words, in just two years, the Akkar district has experienced an overall loss of 14% of its forest area, estimated at 21.000 hectares.

The important work of the Akkar Trail organization

To face this dramatic situation, the Lebanese population and civil society are trying to develop different actions to prevent and fight against forest fires. It is remarkable the case of the association Akkar Trail, which last June joined the Med-O-Med network.

Akkar Trail is an organization based in Akkar governorate, whose main work focuses on protecting the environment and promoting ecotourism with an emphasis on mountain hiking trails and outdoor activities.

In the frame of these important objectives and missions, we would like to focus on one of its new projects, in order to highlight its importance, and its needs for a successful completion.

In fact, between the years 2020 and 2021, the fire-season – which becomes longer and longer as time goes by- has destroyed more than 3,000 hectares in Akkar governorate (Lebanon’s Northernmost governorate) alone.

The creation of a team for firefighting and mountain rescue operations

Indeed, it is precisely in the framework of this will to protect nature and biodiversity – very important and unique in the mountains and forests of Akkar – that this association is also developing a project to fight against forest fires.

This project was born from the fact that approximately a 70% of the total area of the region is highly exposed to the risk of fire. Their goal is to provide an adequate response to the complex situation directly on the ground.

The project, already implemented this summer, aimed at the creation of a forest-fire fighting team that can act quickly and independently.

For this purpose, this project is articulated around two main axes: team training and the acquisition of the necessary equipment for the operations.

The main goal is, therefore, to become self-efficient by being well trained and equipped, in order to be ready for rapid responses and efficient interventions in rugged environments and difficult roads.

This rapid response plan focuses on:

It is also important for this team to have a high level of coordination with civil defense teams and local authorities, as well as to take into consideration factors such as the adjustment between dense forests and active agricultural lands, or the topography and climate factors. This is particularly the case of the dry east winds which in summer facilitate the outbreak of fires and unfortunately make them uncontrollable both in the valleys or the plateaus of Akkar. 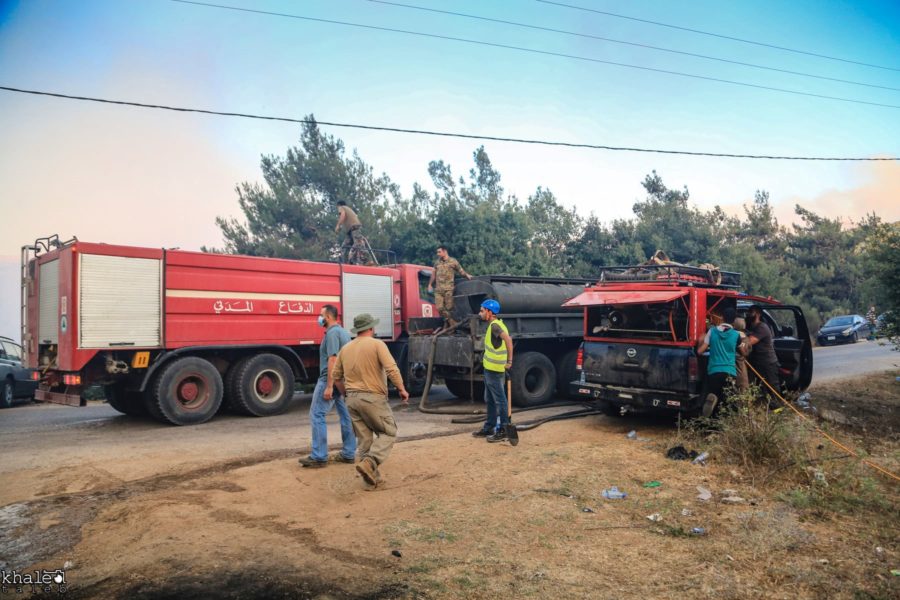 The current status of Akkar Trail’s team for firefighting:

The team currently has 10 volunteers, along with two vehicles that have been equipped and prepared locally, through donations presented by the organization’s friends and supporters, both within Lebanon but also across the whole world.

Lezzab (a reference to the juniper tree) and Shuh (referring to the Abies tree) are considered the only two vehicles in the entire Jord Akkar area are capable of 1) reaching the depths of the forests and 2) dealing with any fire in the rugged environments.

The team has dealt with over 27 forest fires since August 22nd, 2021, including huge fires, and their vehicles have proven exceptional efficiency, especially with a water hose length of about 600 meters, which is twice the available length for any civil defense vehicle across all of Lebanon.

Major challenges to develop and equip the team with adequate equipment 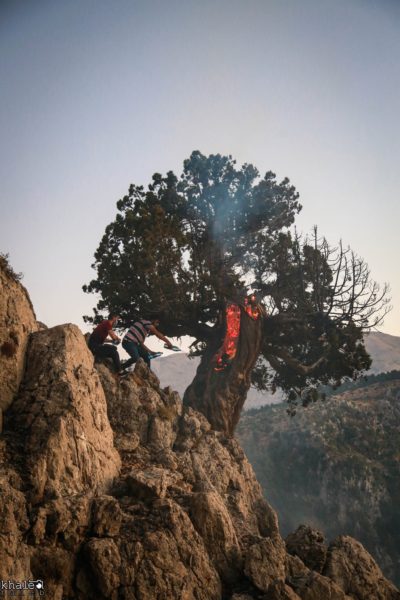 They also aim to develop and expand the capabilities of the team in order to achieve their objectives on a larger scale, whether in the fight against forest fires, mountain rescue or environmental development activities in the governorate of Akkar. In addition, activities aiming at raising awareness are part of a strategy to fight against fires.

That is why, in the coming years, they also want to create a center to increase the number of volunteers, and thus use and share the experience they have gained in recent years, especially to cope with the fragility of government institutions, which includes both the lack of funding and the weakness of its resources.

The experience of this long and hard summer marked by important fires have led the organization to realize the importance of becoming self-sufficient in order to achieve a greater efficiency.  This implies the acquisition of a complete and additional equipment, in order to fill all the deficiencies that characterize firefighting, as shown by the following examples:

Shortage of equipment and means:

There is indeed a huge lack of firefighting equipment in Akkar’s civil defense centers, especially four-wheeled vehicles, which are needed to reach deep forests, as well as a lack of essential infrastructure, such as water networks, ponds, hydrants, watchtowers, forest roads etc.

It is also possible to add the absence of any mountain rescue center in the Jurd al-Qaytaa area, even though it is one of the harshest environments in Lebanon (the nearest center is about one hour away).

It is also important to note the absence of any wildfire response plans from the municipalities and local authorities, as well as the lack of training programs, which should target every team involved in firefighting and rescuing interventions.

The organization also points out at the lack of environmental awareness among citizens as well as the lack of alternative sources of income, which can lead to human-caused fires.

Finally, the fragility of current national laws and the absence of a strict protection policy are among the factors that have increased the threat of forest fires, especially regarding the lack of sustainable forest management policies.

Nevertheless, the organization does not have the resources, both material and financial, to face the immense challenges and needs.

For this reason, through this article, we would like to contribute to the promotion of Akkar Trail’s project, to help it become more autonomous and to act freely and effectively. We are making an appeal for donations and funding so that they can have the necessary equipment to carry out a mission as important as the preservation of nature.

If you want to help them economically, donations can be made through a kitty accessible on the following funding platform:

It is important to emphasize that Akkar Trail seeks to ensure the maximum sustainability of its resources in light of the global challenges we are all currently facing, from climate change to other environmental challenges, which affect all the ecosystems of our forests, having a devastating impact not only on us, but on future generations and their way of life as well.