Hidden in the middle of the desert in Saudi Arabia, we find this wonder, the ancient city of Al-Ula, carved in sandstone by men. A huge museum outdoors that intends to open to a cultural and sustainable tourism. 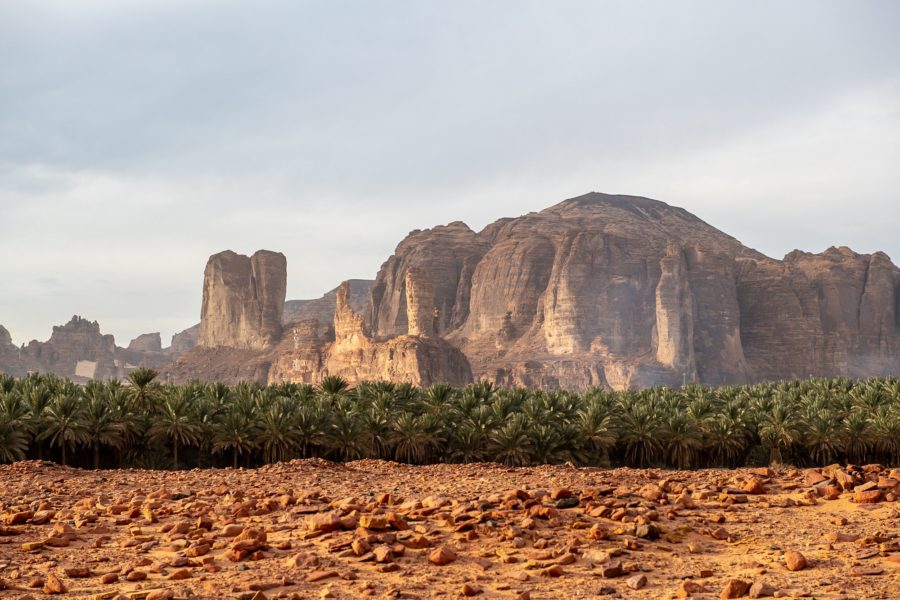 Al-Ula oasisMore than 2,000 years old, and locted in the North-East of the country, Al-Ula is approximately as big as Belgium. The city is formed by an oasis and a rocky area which holds many monuments and objects dating back to the 9th century B.C. This makes this place, not only one of the most important heritage sites of the country, but of the world as a whole.

In the past, this city was an important meeting point for several civilizations, as it was an essential place of transit for caravans and the supply of water. Thanks to the monopoly it held over myrrh, incense, and species, the Nabatean kingdom flourished in the settlement and became a key point for trade between the North and the South for the Arabian Peninsula, the north of Africa and India.

However, the Nabatean were not its first dwellers. In addition to the many cave engravings from the Neolithic period, there have also been found roots from the mysterious Dadanitic and Lihyanite civilizations, that predated the Nabatean civilization in the 6th and 7th centuries B.C.

Within the area of Al-Ula, we find Mada’in Saleh (Cities of Saleh), a place also known as the archaeological site of Al-Hijr (Place of Rock).

It was approximately in the 1st century, maybe before, when the Nabateans conquered Al-Hijr and turned it into their main city in the South, the second most important city after their capital, Petra (Jordan). Due to its grandeur and its resemblance with the later, it is known as the “Petra of Saudi Arabia”. However, it is not very well-known and it is hard to visit, as Saudi Arabia is a country with many restrictions to foreign tourists. In spite of this, UNESCO declared Mada’in Saleh a World Heritage Site in 2008, becoming the country’s first site in attaining this recognition.

Al-Hijr is an exceptional reminder of the Nabatean civilization. Located in the middle of the desert, it is formed by a group of huge rocks carved with architectural features similar to those of Petra. The geology of Mada’in Saleh was perfect for the Nabatean settlements, with their characteristic carvings filled with details. In this archaeological ensemble we find temples, palaces, and lots of tombs.

Some of the carved rocks can reach a height of 16 meters. We also find some natural cracks that remind us of its sister city. However, thanks to its location and, especially, to the lack of tourism, the remains are better preserved than those of Petra.

Burials were common. In the dark of the caved halls there were many mummified bodies, anointed with resin and vegetable oils. Next to them, there were the remains of tombs, as well as necklaces made with dates, glass beads, recipients carved in bones, coins, arrowheads, among others. One of the main characteristics of the Nabatean civilization was its great dexterity with the agricultural and construction techniques. They developed an important oasis agriculture, digging reservoirs and wells in the rock, aimed at storing rainwater. This was later distributed through the valley by relying on a channel system. They also built dams for the storage of water, whose base was formed by stones with a lime mortar layer, as the soil was really sandy and didn’t retain the water.

In the banks aimed at agriculture, they grew corn, barley, sesame, olives, vines, saffron, among other products. They also cultivated date palm trees. In fact, the Nabatean agriculture, known through the translation into Arabic of the Book of Nabatean Agriculture in the 3rd century A.C., had a huge impact in the agronomists of Al-Andalus.

When the Nabatean kingdom was annexed to the Roma Empire, the commercial trade became a sea route through the Red Sea. With the decrease of trade, the city began to be abandoned, and the desertification did the rest. From that time, until the revelation of Islam, there is very few information. Then, we find some mentions from pilgrims heading to Mecca, who name it as a place for the provision of water. Under the Ottoman Empire, several fortresses were built in Al-Hijr to protect the pilgrimage route to Mecca.

In the 20th century, in the 60s, the government of Saudi Arabia developed a plan to settle the Nomadic Bedouin tribes there, by recycling the water wells that already existing and the agricultural features of the site. However, the program did not last long, as Al-Hijr was officially recognized as an archeological site in 1972, so the tribes were moved outside of the limits of Mada’in Saleh in order to preserve the place.

Archaeological researchers and excavations have been scarce since 1972, and it has not been until the year 2000 that research teams have been invited to the site, shedding some light to the huge works carried out by the Nabatean.

Certainly, the city of Al-Ula is a real treasure, an area rich in archaeological remains, which is at the center of the preservation efforts recently launched by Saudi Arabia. In fact, two years ago, the country signed an agreement with France for the touristic and cultural development of the site.

The Saudi-French agreement, with a planned duration of ten years, aims at recovering the site from the damages caused by erosion and vandalism. It is an unprecedented agreement that covers many fields: archaeology, cultural and artistic offer, tourism, environment, infrastructure, energy, transport, and training programs.

The building of a museum has also been planned, as well as a historical and archaeological research center, that would generate a sum of 38,000 job vacancies. Once the region has been prepared (it already has an airport), it should be able to receive between 1,5 and 2 million visitors a year, developing a sustainable tourism respectful with the environment, according to the Saudi authorities.

Al-Ula is expected to open to tourism soon. In 2023, according to the Saudi authorities, the launching will be described as a “gift to the world”.

Tourism is the main axe of a program of reforms that complements a liberalizing policy for Saudi Arabia, which has also reached to world of art. Last January, in Al-Ula’s oasis took place an impressive exhibition of “land art”, Desert X AlUla. It was a unique contest, the first one of this nature celebrated in the Saudi kingdom, that aimed at promoting the intercultural dialogue between Saudi artists and their neighbors, in addition to international artists who had already participated in the two prior editions of Desert X that had taken place outside the country.

Certainly, the opening of Al-Ula to the world is part of the efforts of Saudi Arabia to preserve its economy in the post-oil era, and its intention to open itself to the ways and traditions of the Western countries.