Blink and you’ll miss it. The sand cat is a shy and secretive animal only seen in the desert at night. 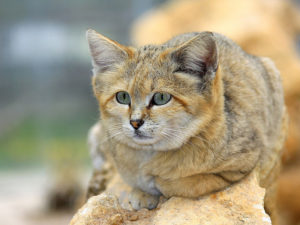 It’s a nocturnal hunter perfectly adapted to its desert home. It doesn’t need to drink water as it can get all it needs from the small birds, reptiles and mammals that are its prey. Special hairs in its ears and on its paws keep the sand out. Despite its wide distribution across the deserts of North Africa, Arabia and Central Asia, little is known about this elusive species.

“There’s an absence of scientists working on sand cats and very few assessments are being made to assess the behaviour, population and status of the species,” says John Newby of the Sahara Conservation Fund. 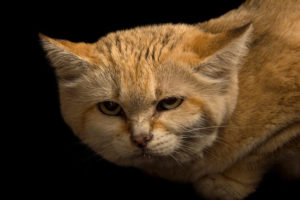 Lack of records and difficulty in spotting it means we don’t even know how well it is faring. Sand cats are listed as “near threatened” on the International Union for Conservation of Nature (IUCN) red list and as endangered in the United Arab Emirates, where the Al Ain Zoo is a hotspot for captive breeding programmes to try to conserve the species.

“Sand cats are naturally rare,” says Newby. On top of that, populations are thought to be declining due to habitat loss and falling numbers of prey species. In western UAE, the cat has only been documented in the wild anecdotally – and even such records date to 10 years or more ago.

Animals and plants of the Baynouna 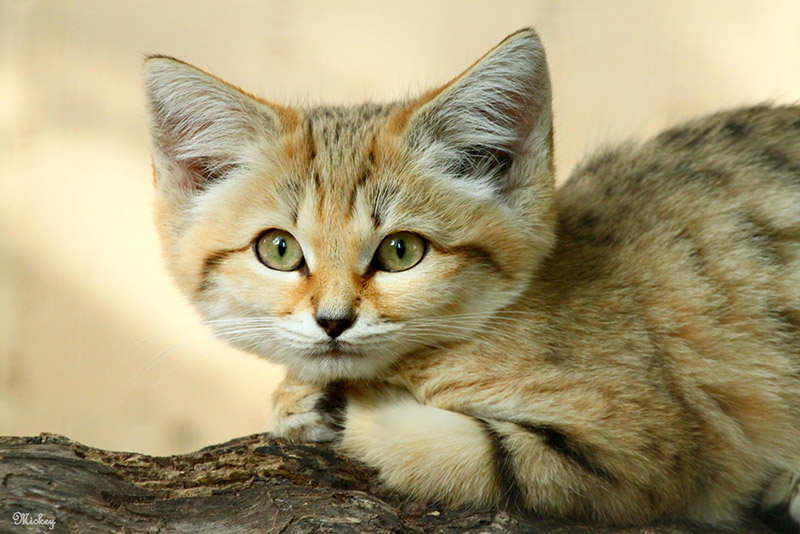 In 2015, Shakeel Ahmed, an assistant scientist at The Environment Agency – Abu Dhabi (EAD) led a team studying the animals and plants of the Baynouna – a protected area in Abu Dhabi. They baited camera traps with cat food over several months and eventually managed to get 46 photos, which the team later identified as being of three individuals. Sightings were usually late on moonlit nights and at cooler times, suggesting the cats prefer medium to low temperatures of between 11 and 28 °C. Their habitat was in sparsely vegetated sand dunes.

The team also set traps for small animals, and caught Cheeseman’s gerbils and the lesser jerboa. Other sightings on the camera included the urchin beetle, and reptiles such as Arabian sand skink and gecko. All these mean there is plenty of food available in the region for the sand cat.

The team hopes this information will help inform future conservation strategies. For example, it could be useful for work comparing the relatedness of this population to those in neighbouring 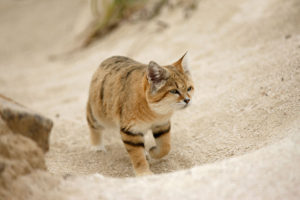 “It is clear that field research will all be extremely valuable in putting together conservations plans for the sand cats and their habitat, as well as pin-pointing those areas and their extent that may be turned into protected areas to conserve the cats,” says Newby. “Scientists need to be doing more research on how the sand cats live in order to create a suitable protected area.”