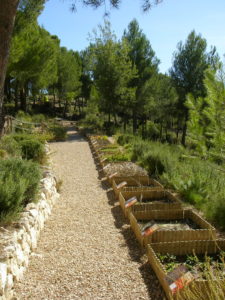 The Biological Station Torretes led by our friend and collaborator, Dr. Segundo Ríos Ruiz, has been recently accepted as a botanic garden by the AIMJB Comitee (Ibero Macaronesian Botanic Garden Association). The Biological Station Torretes is located in the municipality of Ibi, on the region of Alicante, in the South East of Spain, constituting an ecological corridor which forms a connection between the interior plains and the mountainous region in northern Alicante.

The corridor presents a high biodiversity index regarding flora and fauna. It is also a representative example of the Mediterranean landscape mosaic, meaning the biodiversity basis within our latitudes. Once in the garden, we can walk around the agricultural plots and mountain areas bordering the station, both with plantations and paths showing great botanic and ethnobotanic value. Meanwhile, visitors can enjoy a design perfectly integrated in the rainfed landscape typically found in this region.

The garden has rich botanic collections aimed to the traditional vegetal resources conservation natives to the Mediterranean, European and Latin-American culture. We can walk through the beautiful garden, while appreciating the medicinal plants used to work in conservation, research and divulgation issues. Those plants are considered one of the main identity signs concerning not only the garden but also the whole station.

Furthermore, the garden owns other collections as the industrial and food plants, and the so-called “monographic collections”. Some relevant examples among those collections would include Salvietum, which compiles around 100 species of plants coming from other continents; Narcissus, aimed to the conservation of species natives to Maghreb and Mediterranean countries, old wild rosebushes, Sempervivum and carnations among others.

Therefore, collections are focused on common objectives based in the scientific communication addressed to the unspecialized public, the conservation of endemic or endangered species and the research aimed to find out active ingredients which could be useful for the food and cosmetic industry.

The garden has rich botanic collections aimed to the traditional vegetal resources conservation natives to the Mediterranean, European and Latin-American culture.

Finally, the Garden has his own Seeds Bank with a great potential from the phytochemical point of view and focused on vulnerable species. The Bank contains two collections: Amaryllidaceae and Salvia. Moreover, species such as Thymus ad Origanum as well as other traditional medicinal plants from the Mediterranean region are preserved through a long-term methodology.