In the last few weeks, we have been carrying out the tour of presentations and dissemination of our recent cultural projects: the book “El enigama del agua en al-Andalus” (The Enigma of Water in al-Andalus), written by our president Cherif Abderrahman Jah (Lunwerg publishing house), and the short documentary “Las voces del agua” (The Voices of Water) produced by La Movie Productions. 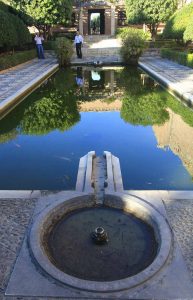 These cultural events took place in different cities of Andalusia, with the collaboration of cultural institutions, all of them related with the Islamic culture. We visited Seville presenting the book in the Fundación Tres Culturas (Three Cultures of the Mediterranean Foundation), Cordoba at La Biblioteca Viva de Al-Andalus (The Living Library of Al-Andalus), Granada at Fundación EuroArabe (The Euroarabic Foundation) and finally Toledo in collaboration with the Real Fundación de Toledo (Royal Foundation of Toledo).

Many people assisted to the events organized and of both works were very well received. Some of the experts who accompanied us during the presentations were Emilio González Ferrín in Seville (Arabist specialized in Islamic Thought), María Jesús Viguera (Director of the Living Library of Al-Andalus) Antonio Arjona and Rafael Frochoso, both arabists in Cordoba, and finally in Granada, Manuel Casares and  F.Javier Guillén Berrendero, both Med-O-Med collaborators. Finally in Toledo we counted on the presence of the archaeologist Jesús Carroble, Director of the Project “Cultural Landscapes of the Cigarrales in Toledo” – ‘cigarrales’ are country houses on the banks of the Tagus River near Toledo -, who presented the research undertaken by his team regarding a network of qanats found in Pozuela and dated to the 11th Century in the epoch of the Taifa kingdoms.

These cultural events took place in different cities of Andalusia, with the collaboration of cultural institutions, all of them related with the Islamic culture.

The main ideas discussed during the presentations were the water as a creator and designer of the landscape, the cities and the economic development of al-Andalus, and the essential need to protect the wealthy heritage related to the traditional use of water, as some elder farmers from the last Moorish regions in Spain still do.

The water as a factor of development

During the presentations, the role of the water in al-Andalus has been analyzed from a social point of view. Moreover, the aesthetic value in the architecture of gardens through elements such as fountains, ponds or channels and the presence of the water in the garden related to sensations as freshness, sounds and lightness were also highlighted.

Furthermore, mention was made of the numerous words remaining in the Spanish language related to water, which have its origin in the Arabic language. The spiritual significance of the water as well as its function as a purifying element and creator of life were treated during the debate together with the water as an element of transformation of the landscape, creating an orchard plenty of crops and irrigation channels.

The voices of water 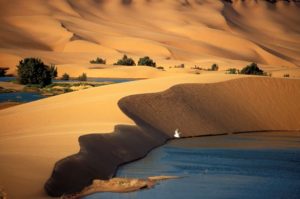 This was followed by a short documentary titled “The Voices of Water” made by the producer La Movie, including the contents of the book as well as the ideas emerged from the Med-O-Med project “Wise Voices” carried out by the journalist Elena García Quevedo and the photographer Carlos Martínez, available at Med-O-Med’s website (unfortunately only in Spanish language). This short film aims at giving voice to those elderly farmers that grow and irrigate the fields in the traditional way, using techniques inherited from their al-Andalus ancestors in ancient Moorish regions in Spain: Axarquía in Málaga (from the Arabic “xarq” which means orient), Ricote Valley in Murcia and Alpujarras in Granada and Almería.

These elders preserve a great wisdom with regard to water management and other resources which, if not inherited by the next generation, threatens to disappear.

These elders preserve a great wisdom with regard to water management and other resources which, if not inherited by the next generation, threatens to disappear. Cabañuelas, for instance, a method of forecasting the weather, would be an excellent example.

The short film has been made with creative visual resources that enhance the charming character of the grandparents, and at the same time, it counters the beauty of the countryside with the harshness of life in the cities, thus posing a call for awareness not only about the importance of taking up that legacy, but also strengthening and giving continuity to some of these masterful uses.