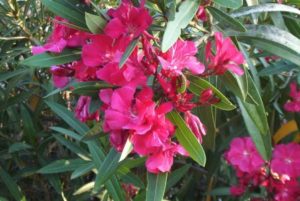 ROYAL ROSEBAY (Nerium oleander L.) In al-Andalus, dafla. It is a toxic shrub, although considered ornamental due to its beautiful dark pink  (or, exceptionally, white) flowers of about five centimetres in diameter. In al-Andalus, it could be wild or cultivated. It was always located near water, in rivers, drains and ponds.

Its culture is documented from the 10th to the 15th century. This plant  appeared in the botanical gardens of Toledo and Seville (11th century), as mentioned by Ibn Bassal . Also Ibn Luyun wrote about it featuring prominently in Andalusian gardens.

LILY (Lilium candidum L.)  Called in al-Andalus sawsan. Originally from the Middle East, it was cultivated as a plant of great ornamental beauty since Antiquity. Their white flowers exhale a strong aroma, specially at dusk. In al-Andalus lilies were planted next to water drains.

Apparently, they were to be found in the gardens of Madinat al Zahra’ and in those of king Ibn Abbad of Seville. Ibn al-Awwam (13th century) writes that if you plant mint next to it, this preserves the plant, helping its healthy growth. This same author documents white, blue, brown and yellow lilies as prevalent varieties in his time.