In spite that its speed reaches 112 km/h, at the beginning of April, the Saharan cheetah took some time to stop in front of the cameras and show its most symbolic places. And, as a star who is asked for a bis, it came back the following day, falling into a “photographic trap”.

Good news for the naturalists, who had not been able of filming the Acinonyx jubatus hecki*, or Saharan cheetah, since 2008. These images are the result of the patient work carried out by the field teams of the Algerian Cultural Parks Project (PPCA), who launched their third campaign registration campaign since 2017 in the Ahagaar Park, South of Algeria, from March 15th to April 9th, 2020. “It was on the 23rd of March and the 3rd of April”, proudly announced Salah Amokrane, director at the PPCA, in the Algerian TV. 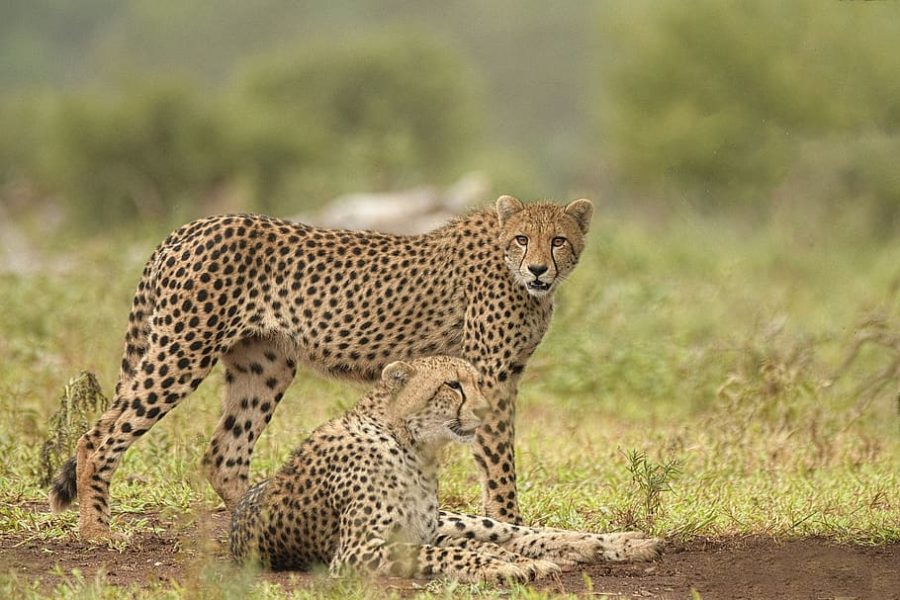 “To have been able to film the Saharan cheetah is a great victory, as it is very difficult to track and record”, explained Abdenour Moussouni, head of planning and biodiversity of the Algerian cultural parks network, who helped install and replace the 40 tramp cameras spread across the rock desert.

“To record all the land covered by the cheetah, which reaches up to a 1,000 km2, we have to install infrared cameras every 10 km. But we don’t have a road network here! Some distances must be covered by foot or camel.”

The great size of this protected area is of 633,887 km2, an area bigger than Somalia. Such a vast park holds the Hoggar Mountains, Mount Tahat, with a height of 2,918 m, and facing the volcanic fields of Atakor and Tamanrasset. At the bottom of this ochre mountains, we find vast cliffs with scattered acacias, olive trees, tamarisks, palm trees, mugwort bushes and myrtles.

“To have been able to film the Saharan cheetah is a great victory, as it is very difficult to track and record”

Here, the cheetah survives in the wild by chasing its favorite preys, the ariel gazelle and the barbary sheep. With a heat that reaches up to 40 ªC, the cheetah usually goes out at night or dawn. This predator, lighter and smaller, but also more fragile than its South African cousin, is exclusively carnivorous. It is able to survive for months in very arid lands without water, drinking only the water contained in its prey’s meat, on which it depends exclusively. 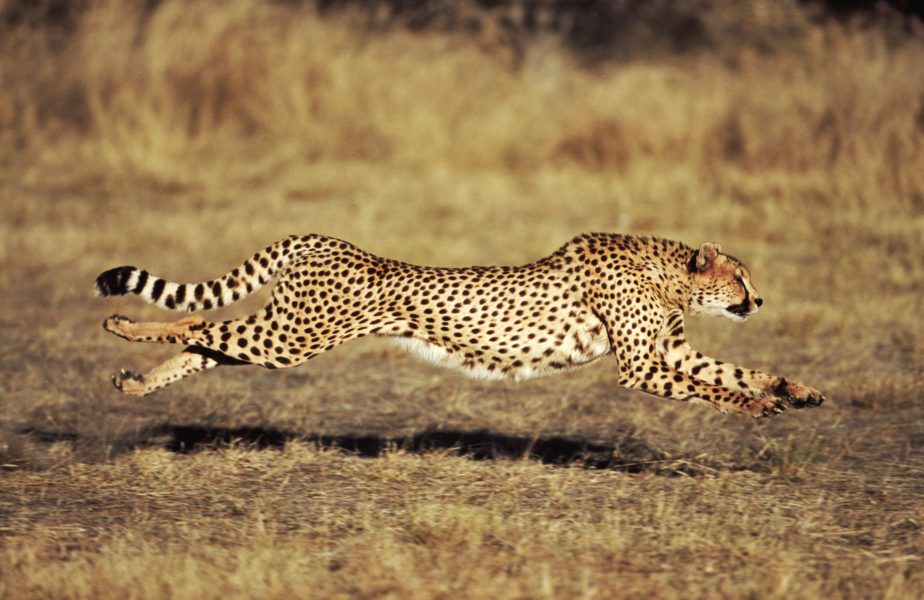 This rare video should not hide the tragic situation faced by the cheetah in Africa, particularly in Western and Central Africa. In 2008, the International Union for Conservation of Nature (IUCN) estimated that there were less than 250 specimens in Algeria, Niger, Benin, Burkina Faso and Chad. By way of comparison, the IUCN estimated that the number of elephants in the region reached 415,000 specimens in 2016.

“The Acinnyx jubatus is considered a vulnerable species, as there are less than 7,000 cheetahs (wild or in captivity) in the whole continent and Iran.”

“The Acinnyx jubatus is considered a vulnerable species, as there are less than 7,000 cheetahs (wild or in captivity) in the whole continent and Iran”, states Florian Kirchner, from IUCN. “Our Saharan cheetah, from the subspecies hecki, is in critical danger. It is on the brink of complete extinction”.

The causes are well identified. Desertification is forcing a great number of Tuareg nomads to settled own, taking their flocks of camels and goats into protected areas. These small and big flocks push out the herbivore population, such as the gazelles and barbary sheep, which are, at the same time, decreasing in numbers due to the lack of grass.

The use of acacia wood for domestic purposes also contributes to the destruction of the Hoggar’s wild fauna, which usually seek there refuge, shadow and food. Thus disappears one of the only witnesses of the cheetahs live.

It is in the trunk of these acacias that the cheetah leaves its trace of claws, excrements and tracks. This “message trees” are very useful for naturalists, who analyze them and find out where to install the camera traps. 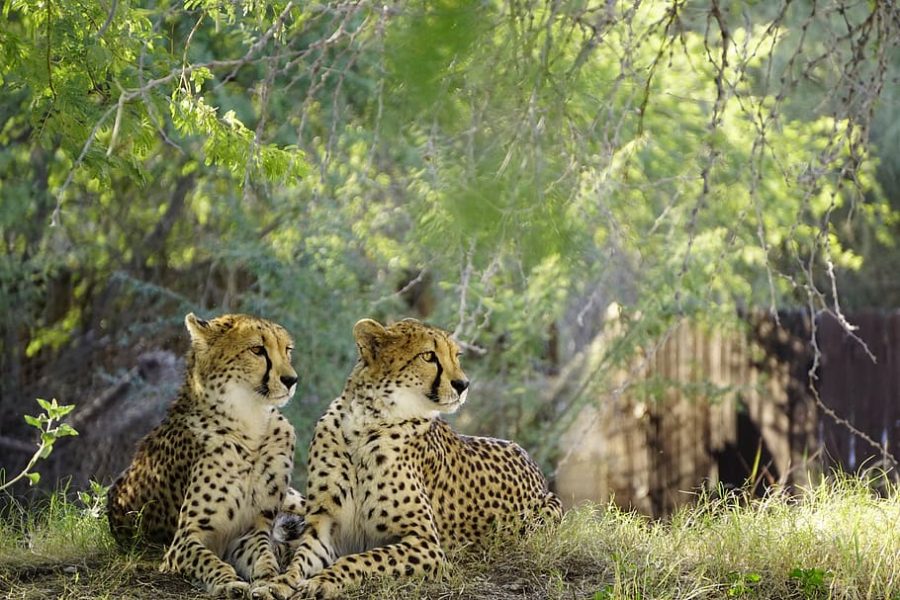 “The observation of the land, the excrements and these videos’ information are the only elements that update us on the status of the wild life and its habitat, which is constantly decreasing”, explains the Algerian Farid Belbachir. Belbachir is a specialist on the Saharan cheetah, who has published the most complete work on the Acinonyx jubatus hecki in the last decade, as well as on its coexistence with the Tuareg people.

“We need to remember that, in the 19th century, this specie spread all across the continent and beyond”, says Florian Kirchner (IUCN). From Western Africa to Eastern Africa and up to India! And all these regions were connected. Today, none of them have links, and outside the African continent, only Iran holds less than fifty Asian cheetahs [Acinonyx jubatus venaticus]”. This fragmentation results in a smaller relation between groups, and accelerates the species’ decline through inbreeding”.

“Our Saharan cheetah, from the subspecies hecki, is in critical danger. It is on the brink of complete extinction”.

Over-hunting of prey animals is also a big problem, especially in Algeria, where they become game meat for private consumption. The cheetahs hunt small flocks and are victims of poisoning or the shooting of shepherds. Illegal hunting contributes to this situation. “The strong continental trend is decreasing”, ensures Audrey Ipavec, specialist on cheetahs and wild dogs, and regional coordinator for the panafrican program of the American NGO Wildlife Conservation Society, and the Zoological Society of London. “Cheetahs and their preys have lost more than a 90% of their habitat, in spite of the creation of protected areas”.

However, Algeria, which has signed all international conventions for the protection of nature since 1968, has strengthened its efforts in the last years in order to preserve its wild flora and fauna. The biggest country in the continent, it has 107 mammal species, of whom 47 are protected and 30 are endangered species. It also has 336 bird species, 107 of them are protected species. 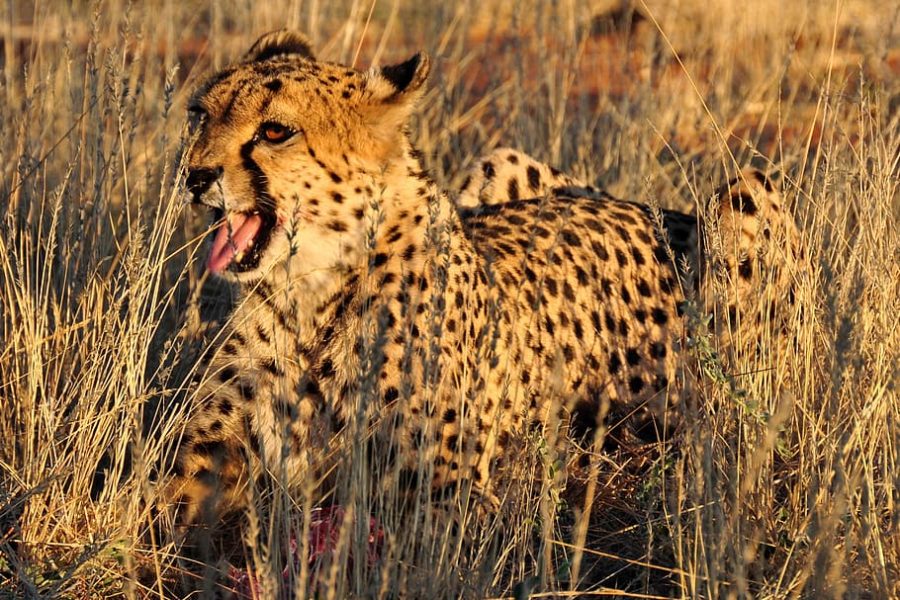 In 2009, the Ministry of Culture, in collaboration with the Global Environment Facility (GEF), and the United Nations Development Programme (UNDP), launched the Algerian Cultural Parks Project. In 2013 began the program’s second phase, which promotes measures of identification, preservation, and improvement of the cultural heritage and biodiversity in five Algerian parks (Saharan Atlas, Tindouf, Touat Gourara Sidiket, Tassili N’Ajjer). Collaboration with the local population for ecotourism purposes has also been promoted. The cheetah has become this policy’s totem.

In trying to stop its decline, “we need to strengthen our efforts to raise-awareness and transfer the ancestral knowledge of the Tuareg population”, explains Abdenour Moussouni, from the APCP, who also highlights the need to train local specialists that contribute to the surveillance in the checkpoints all across the region.

The Acinonyx already suffers from a low genetic variation, impoverished even more by the decrease of its habitat. Therefore, the extinction of the Saharan cheetah would be a catastrophe”.

Farid Belbachir agrees, but goes straight to the point: “The work has been launched, and it is an important change that needs to continue in the long-term. But, most importantly, the law needs to be applied, because, in the last year, Algeria has developed all the necessary legal procedures to put an end to over-hunting, illegal hunt and the use of weapons”.

“Today, some of the most optimistic models estimate a population of 200 hecki, but we need to be careful, specially due the phenomenon of inbreeding”, explains Philippe Chardonnet, co-president of the Group of Specialists in Antelopes of the IUCN. “And when there are no other animals in nature, it is the beginning of the end”. Given the size of the Ahagaar Park, “the Hoggar Mountains are the Saharan cheetah’s last hope for survival”, says Chardonnet.

This predator, lighter and smaller, but also more fragile than its South African cousin, is exclusively carnivorous.

The Acinonyx already suffers from a low genetic variation, impoverished even more by the decrease of its habitat. Therefore, the extinction of the Saharan cheetah would be a catastrophe”.

In contrast with the Panthera, which includes species of tigers, lions, leopards, jaguars, and panthers, the Acinonyx has only one species, the cheetah, and five subspecies, among them the Saharan cheetah. If it dies, one full lineage will be lost forever, accelerating the end for the rest of subspecies.

* The photographs included in the article do not necessary belong to the Algerian hecki subspecies, but picture African cheetahs in general.