The Olive tree is one of the oldest living beings on the planet and our valuable natural heritage that needs to be preserved. However, recent years have seen Spain’s thousand-year-old olive trees face one of their biggest threats to date: a growing demand for unique garden ornaments that has led to the trees being uprooted and transported around the world, from northern Europe, to the US, and the United Arab Emirates. 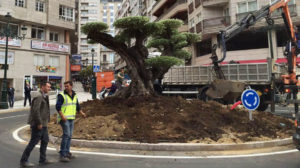 Iciar Bollain’s new film, “The olive tree”, which will be released next May, denounced the plunder of this tree, consequence of the economic crisis and the abandonment of rural areas, and supports the fight for its preservation. The film explains the sale of olive trees as a metaphor. According to Bollain, “It’s a very concrete way to address something very complex, the speculation with something as basic as a tree and the little respect paid to something that has been in the ground for so long and has been a source of health, wellbeing and pleasure”.

César-Javier Palacios of Madrid’s Félix Rodríguez de la Fuente Foundation, institution dedicated to honoring the memory of one of Spain’s best-known naturalists, and director of the European project Life+ EnArbolar aimed at conservation singular trees and old forests within the Natura 2000 network, recently launched a Change.org petition for the preservation of  European centenarians trees, prohibiting their extraction and trade.

This request, addressed to the European Parliament, has reached nearly 145,000 signatures. The campaign expects to obtain over 150,000 with the support of Germany and the United Kingdom that are mobilizing people towards a “global action” against this type of abusive marketing.

Palacios is hoping the EU will recognize the trees as living history, giving the foundation a starting point from which to try and convince Spanish politicians to do more to protect them. In the past two decades, dozens of companies have sprung up across Spain to feed a robust international demand for ancient olive trees. Portugal and Greece also profit from these species, considered as ‘art’ can be sold and transported as far away as California or Abu Dhabi”. Since many trees are damaged or even die during this process, the expert Palacios urges the international market paralysis of these monumental trees.

After being uprooted from the land, the olive are pruned as bonsais in order to facilitate transportation and are stored in nurseries waiting for the next buyers. This hustle causes the death of many trees and reduces life expectancy of survivors “to just twenty years” due to factors such as orientation, climate or soil different in their original habitat. Indeed, an olive tree can live more than a thousand years “, as it happens with the one located in Horta de San Juan (Tarragona), which receives “star treatment, and the idea that someone could uproot this olive tree is unthinkable.”

Although These trees are part of our natural heritage present in our customs, the landscape or the Spanish cultural roots, Palacios claims that today we treat them as if they were sculptures, or lampposts, that we can take from one place and put in another without respect. 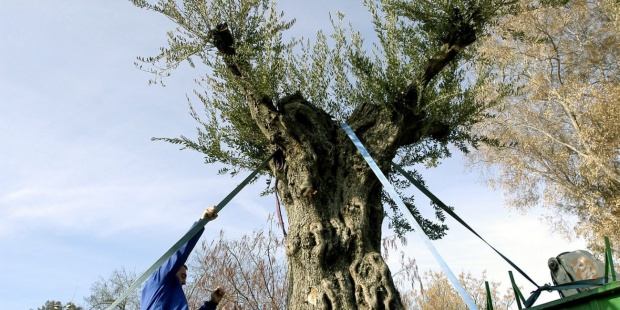 This specialist also denounces the ignorance about the benefits of conserving these trees. There are interesting alternatives, such as developing oleo tourism or oil routes, establishing accommodation in cottages, and the acquisition of “green gold” among other possibilities. This is the case of the Maestrazgo (Castellón), which holds more than 4,000 veterans trees, which is the largest concentration of ancient olive trees in the world and this initiative allows the maintenance of  a traditional landscape where the olive tree still going largely from generation to generation.

In 2006 the Valencia established the Arboreal  Monumental Heritage Act precisely tin order to prohibit selling olives and other unique trees over 350 years, provided that the tree exceeds 6 meters in diameter of the trunk, 30 meters or 25 meters cup diameter.

Palacios expects the film Bollaín would help to “stop the senselessness” of trade with these species, which destroys the landscape modifying negatively the perception of society concerning environment.

Some Non Governamental Organisations (NGOs), such as Greenpeace, also support the initiative of Change.org, because when an area suffers the extraction of olive trees “is a monumental loss of their heritage,” stated Miguel Angel Soto, head of the forest campaign from this ecologist organization. The olive tree “is one of the elements of the Mediterranean trilogy by the wheat and the vine, so without it we cannot understand our civilization,” states Soto.