We take the opportunity to present you with a further important initiative from our collaborator Lahcen Kabiri, President of AOFEP (The Association Oasis Ferkla for the environment and patrimony), this time related to the agricultural worth of the Oasis.

It is a pilot Project called ‘Restoration of the Khettara [or artesian well] Ait Said-Tinjdad and inventory of the irrigated perimeter’. This initiative has a number of objectives which can be summed up as follows: In the first place we seek to improve the efficiency of the irrigation system, as also the agro-ecological methods applied to the palm grove. In addition we will promote the beneficial management of the water resources used in agricultural labour, all within the context of preserving the traditional methods of the patrimony of the oasis.

The oases in the south east of Morocco have suffered a progressive degeneration for multiple reasons, above all due to the over-exploitation of land, pilfering of resources and the lack of perceived value of the given by locals to its worth.

Finally the Project overall seeks to maintain and develop agricultural activity in the palm grove, which will lead to the creation of employment, thus reinforcing society’s role in the conservation of the natural resources of the oasis, in particular the water resources.

Justification of the need for the project 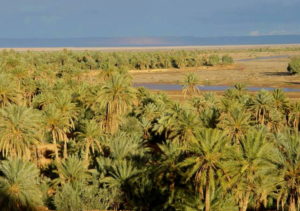 The oases in the south east of Morocco have suffered a progressive degeneration for multiple reasons, above all due to the over-exploitation of land, pilfering of resources and the lack of perceived value of the given by locals to its worth. Specifically the perimeter defining the area is to be found to the south east of the city Tinjdad, in the rural community of Ferkla Oulia, and the management of the water is undertaken through the khettara.

In this area the khettara undergo great variations in the level of water, oscillating between high registers in the wet season and practically inexistent registers in the dry season. For this reason the farmers of the oases have created a method for continuing to Access the water through individual pumps, which negatively affects the phreatic layer, occasioning important losses of water to the irrigation system. 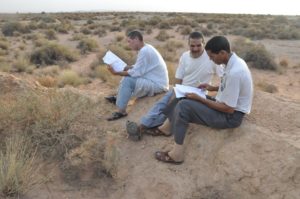 The structure of the economy of the oases is conditioned by the movement of subterranean waters by the khettara, which in turn conditions the farming activity in the different areas. Water is shared out according to the owners of the right of use, who take it in turns to develop the different demands of productivity of vegetables (almond, dates, various types of tree, beneath-grown cultivation, etc.).

However for a number of reasons of climate-change origin (together with the degradation of the khettara and its system of irrigation) there are currently problems of sustainability, evidenced by the low and irregular levels of production.

The structure of the economy of the oases is conditioned by the movement of subterranean waters by the khettara, which in turn conditions the farming activity in the different areas

The khettara was historically a subject of collective management which required the commitment and collaboration of the local community, along with the established partners in the local groups. For this reason there is a specific group of beneficiaries resulting from 350 farmers with ownership of right-of-use and a further beneficiary group, which includes all the inhabitants of the oases of Morocco.

The AOFEP foresees the setup of the restoration Project from an integral viewpoint, covering not only the improvement Works, but also the recovery of the perimeter irrigation system, converting it into a showcase for demonstrations in order to show the value of the Project for all involved in the oasis.

It is significant that the Project has a clear feminist focus and includes women in the set-up. We will count on a number of local partners, national partners, and also a French ONG, between whom we seek to form alliances across the board, focused on achieving the sustainable and enduring development of the desert.