The last issue of ‘e-rph‘ – Electronic Journal of Historical Heritage (in Spanish language) – includes a precise study of the traditional irrigation systems around the Dílar River in the Spanish county of Vega de Granada, carried out by Ana García Leal, art historian and cultural heritage consultant. 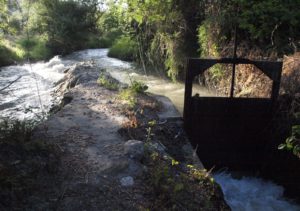 The irrigation system of the Dílar River has almost maintained the same use since its creation during the al-Andalus period with only minor changes set out in the study. The elements of the tangible heritage are organised around the ditches and ‘pagos’ – irrigation subdomains in the territory of each irrigation community –, whereas the intangible heritage in this case covers the organisation of water sharing between the six communities, which is mainly based on two criteria: the flow rate in the ditches and the time period during which water is allocated. 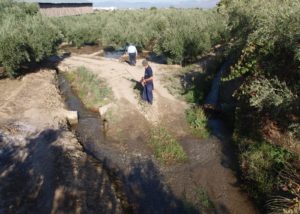 Irrigation by means of justice

As García Leal points out, it is important to clarify that such water distribution principles, known as ‘irrigation by means of justice’, are only applied when water is scarce. Islamic law in medieval times already endorsed that the legislation pertaining to water sharing applied only to rivers or seasons of low water flow. The first written record of the irrigation system of the Dílar River are the 16th century ‘Libros de Apeos y Repartimientos de bienes moriscos’ (Books of Survey and Distribution of Moorish properties). We are therefore faced with a shift system which is a direct legacy of the al-Andalus social organisation and which has continued until today on the basis of respect for immemorial and historical right. 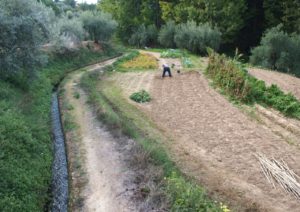 Reading this study promotes an understanding of the importance of the farming (and living) heritage represented by a large number of irrigation communities in Spain. Similarly, Med-O-Med started years ago the project ‘Wise Voices‘ with the goal of compiling and giving prominence to all knowledge on water management and farming of the last generation of Spanish farmers in regions of strong al-Andalus rural tradition with people like Marianne Hilgers, who explained extremely well the importance of the balance between ecology and economics or the functioning of the irrigation communities in Las Alpujarras, Granada.

Ana García Leal concludes the study with a final reflection of deep relevance when she asserts that ‘we should understand the agricultural activity as a core element of these heritage spaces, as it is such agricultural activity that generates all other cultural values. That implies understanding of the farming as a productive element, but also as a cultural asset, protected as such, since the loss of functional productivity is the greatest threat to these spaces’.

You may read the study (unfortunately only in Spanish) on the following link: