Vegetal patterns employed alone or in combination with the other major types of ornament—calligraphy, geometric pattern, and figural representation—adorn a vast number of buildings, manuscripts, objects, and textiles, produced throughout the Islamic world. Unlike calligraphy, whose increasingly popular use as ornament in the early Islamic Arab lands represented a new development, vegetal patterns and the motifs they incorporate were drawn from existing traditions of Byzantine culture in the eastern Mediterranean and Sasanian Iran.

The early centuries of the Islamic era saw the initial adoption of semi naturalistic pre-Islamic motifs and patterns, followed by widespread and highly diverse experimentation adapting these forms to suit the aesthetic interests and tastes of the new Muslim patrons. It was not until the medieval period (tenth–twelfth centuries) that a highly abstract and fully developed Islamic style emerged, featuring that most original and ubiquitous pattern often known as “arabesque.” This term was coined in the early nineteenth century following Napoleon’s famed expedition in Egypt, which contributed so much to the phenomenon of Orientalism in Europe and later in the United States. Arabesque simply means “in the Arab fashion” in French, and few scholars of Islamic art use it today. 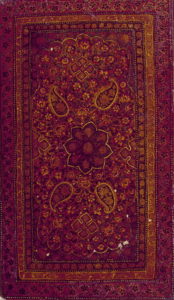 With the Mongol invasion of western Asia in the thirteenth century and the establishment of a Mongol court in Iran in the thirteenth and fourteenth centuries, numerous Chinese motifs and patterns were adopted, though sometimes in markedly revised form. This period saw many transformations in the decorative language of Islamic art that would endure for centuries. In sixteenth-century Europe, first in Italy and then in the north, Islamic-style vegetal patterns were developed. In the sixteenth- and seventeenth-century empires of the Ottomans, Safavids, and Mughals (present-day Turkey, Iran, and India), complicated versions of established patterns were utilized, sometimes incorporating a new interest in naturalistic-looking flowers or blossoms. With the exception of the garden and its usual reference to paradise, vegetal motifs and patterns in Islamic art are largely devoid of symbolic meaning.