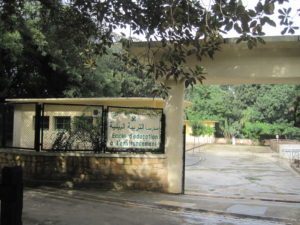 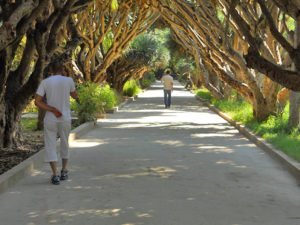 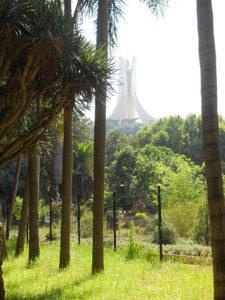 The garden of Hamma was created in 1832 during the first years of the colonization of Algeria by France and it is located in one of the hillsides of the “Arcades Hill”. The arboretum occupies 20Ha and is dominated by the Monument of the Martyrs. In a lower level, a road and the important Fines Arts Museum are found between the arboretum and the Garden itself which is spread over 32Ha until the seafront promenade and the southern side of the Bay of Algiers.

The garden can boast of being located in a privileged place since it is protected from the wind coming from the Arcades Hill. Moreover, the temperature does not fall below 2º and does not rise over 35º. They are enough water deposits aimed to irrigate it, regardless of the season of the year. Hamma means “fever” in Arabic, owing the unhealthy conditions existing during the past in the lowest part of the garden. This area used to be a swamp transformed in an embankment during the construction and conditioning initial phases.

After the similitude with other acclimatization gardens which were constructed in the ancient colonies, the garden had different goals as the introduction, multiplication and diffusion of new plants and the research related to animals in the insectarium and the zoo.

The main purpose of those studies wasn’t the conservation but the genetic resources dissemination showing a potential economic interest. Furthermore, the garden was conceived as a public place to visit and an education space. Indeed, the Algerians were surprised and astonished since they could enjoy for the first time how exotic plants were introduced in the country.

The garden was hardly affected during the first worldwide war. Nevertheless, it was requisitioned during the second one, keeping closed from November 1942 to June 1946. After this period, in 1948, the gardem was rehabilitated; therefore it restarted its activity until 1995.  From 1995 to 2005 it was closed to the general public, but in 2009 it re-opend its doors.

Although its worldwide reputation during the flourishing periods, given the numerous exchanges with other institutions, the garden had lost status and an important rehabilitation was required. At the present moment, the rehabilitation has been completed and the original value of the garden has been recovered. Consequently, it is well-renowned in the botanic gardens scene.

December 2017: official installation of the new Scientific Council of the garden by the Wali of the Wilaya of Algiers.