The high temperatures and arid soil of much of North Africa and the Middle East led, several thousand years ago, to the invention of a novel system of groundwater harvesting to harness any available water resources and distribute them with as little waste as possible. Originating in ancient Persia, the rise and expansion of Islamic civilisation, and the mastery of water use it achieved, contributed to the distribution of this traditional technique throughout the Mediterranean.

Numerous examples of these water collection systems can be found today: from the original canals, or qanat, which persist in Iran and can also be found in other countries such as Spain, where they arrived during the period of Al-Andalus, to the so-called khettara in Morocco, the falj in Oman, or the foggara in Algeria. They also spread Eastwards through present-day Afghanistan and Pakistan, where they are called karez, and as far as China, where they are called kanerjing.  Although they are all similar in terms of the water collection system, they differ in terms of the source of water collection and the technique of water distribution, depending on the geographical characteristics of the regions in which they are located.

This article presents the foggaras of Algeria, a network of underground canals designed to combat the aridity of the Sahara Desert, still in operation today. Despite this, their use today faces numerous dangers that threaten their survival.

The foggara, from the Arabic fakara (to dig), is a horizontal water collection system, which extends below the surface and draws water outwards, conveying it to drier areas and palm groves[1].

The design of the foggara facilitated the search for water and adapted its use to the aridity and heat of the desert climate, supplying a constant flow to its inhabitants and preventing evaporation.

The foggara is a gently sloping underground gallery that drains water from the aquifer upstream to the drier lands downstream towards the palm grove. It is a system of underground channels built 5 to 10 metres below the surface of the ground and ranging in length from 2 to 15 km[2]. These canals are slightly sloped to allow the water to flow to its destination. Although small in diameter, the space is large enough to accommodate a stooped worker, the water measurer, who is in charge of drilling holes to direct the water and maintaining the foggara.

The water from the canal finally comes to the surface to be distributed through the kasria, a ‘comb’ with holes of different sizes that divides the water flow, which continues to flow through small gutters or ditches until it reaches its destination. 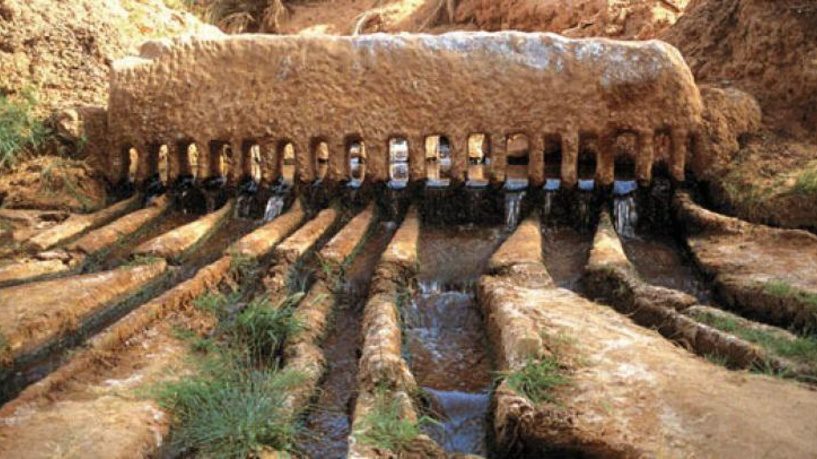 The first foggara is thought to have been introduced between the 11th and 12th centuries, developed by the Arab-Berber tribes of southern Morocco. Although the exact number of foggaras still in operation today is not known, it is estimated to be around 930[3].

These foggaras are mainly concentrated in the oasis areas of Adrar, Gourara and Tidikelt. In these regions, the foggaras constitute more than 2,000 km of underground pipelines[4]. 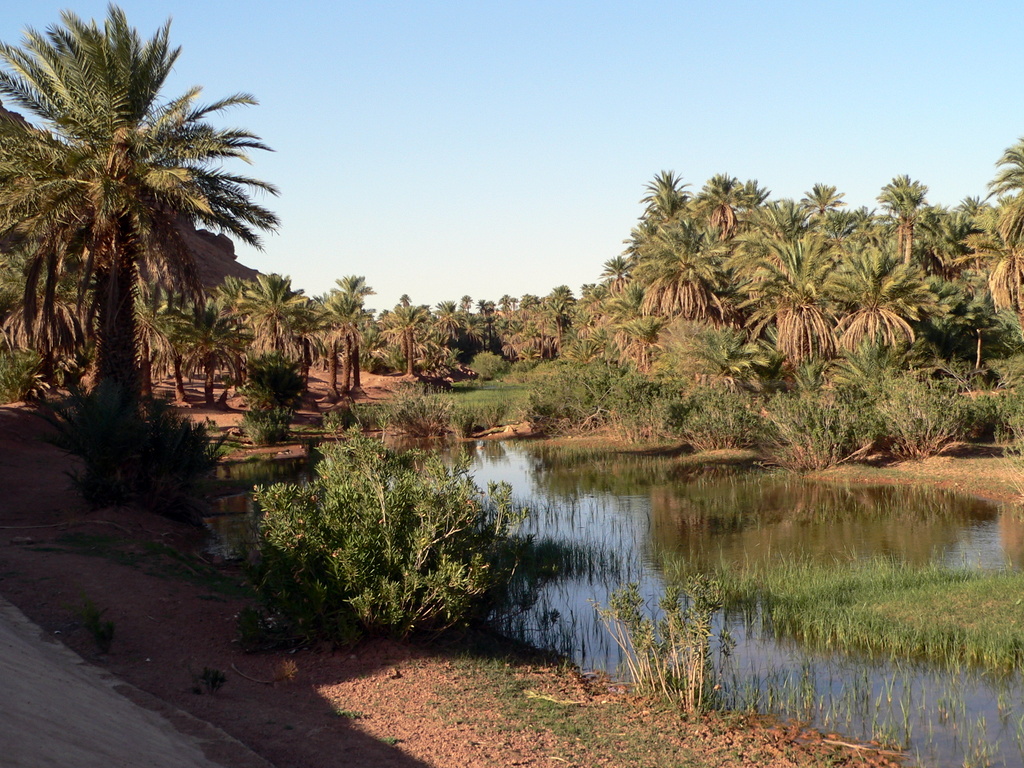 In Adrar, for example, we can highlight the municipality of Ouled Saïd, a network of oases in the southwest of Algeria that has managed to become, thanks to the supply of water from these canals, the centre of date production in North Africa, with more than one hundred varieties of dates destined for its population’s own consumption and for export[5].

The existence of these water sources in the middle of the Sahara desert is not only a source of resources for the Algerian population, it is also an important source of animal and natural life. In particular, this network of oases has become a resting place for a large number of birds that, year after year, join the migratory networks that take them from Europe to Africa. Today, it is estimated that more than seventy-one species of migratory birds pass through this region on their transcontinental migration route[6].

These tools have managed to survive despite the competition posed by more technologically advanced tools such as water pumps. However, their survival is not without risk.

The work carried out by water meters in the foggaras of these Algerian regions was recognised by UNESCO and included on the Intangible Cultural Heritage List in 2018. 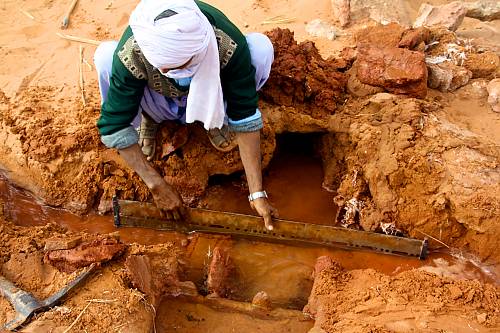 Its inclusion is an acknowledgement of their importance in the functioning of the foggaras, as they ensure “the calculation of water volumes, the flow of water in the ditches and the repair of the distribution channels”, but it is also a call for their need for protection. The international organisation denounces the danger of the disappearance of this age-old technique in the face of the processes of “the transformation of property relations initiated by the central government; the repercussions of modernisation and urbanisation; and the negligence in adopting the measures required to guarantee the transmission of this element of cultural heritage”[7], in addition to the high age of the irrigation channels. The high age of the water meters and the scarcity of new generations trained in this technique who can continue their work are common threats to the water meters.

Unfortunately, these threats are common to most practices recognised as intangible heritage, susceptible to the processes of modernisation of society and the risk of obsolescence, to the emigration of its population and to the lack of intergenerational understanding and difficulties in transmitting knowledge to new generations[8].

These techniques constitute an important historical legacy, a sample of traditional agriculture and of alternative, sustainable and efficient land use models. Their survival requires government intervention and protection from new forms of land exploitation, but also public awareness of the importance and value of these ancient and transnational techniques.