The existence of gardens is as old as culture itself. We find it in early civilizations and it is linked to all of men’s transcendent believes.

The Genesis already portrayed the biblical tradition of the Garden of Eden, which corresponds to the first Muslim paradise (“A river watering the garden flowed from Eden; from there it was separated into four headwaters.”, Genesis 2). This Eden, that it is not identified as a garden, but rather as a place that God reserves to the chosen ones, was created for the eternal enjoyment of men.

In this light, Islamic gardens surpassed its esthetic purpose. In addition to the pleasures of sight and smell, there was also an agricultural purpose, which led to a wise use of water and the development of a science of acclimatization of new botanical species.

This same pattern was followed in the creation of gardens in Egypt, the most ancient gardens created by men, or so they tell the plans found and preserved. 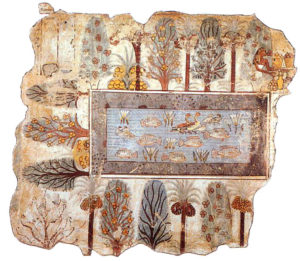 The main goal of Egyptian gardens was to offer shadow and a breath of fresh air to an arid land, lacking in a variety of trees and flowers, such as Egypt. Its population imported foreign exotic species for its private palaces and temples. Old manuscripts tell that queen Hatshepsut brought thirty frankincense trees, and that Thutmotse III ordered the painting of all the trees he had imported from Asia in the temple walls.

Gardens were closed by high walls and were usually rectilinear and geometrical. Egyptian gardens didn’t characterize for their great designs, but rather for their utilitarian style, where everything had a purpose. It was common to find rectangular ponds in the center of the garden, that drank from the water channels supplied by the river Nile, and that were usually decorated with lotus flowers (Nymphaea careluea), whose floating leaves shaded the fish, as well as with Nile grass (Cyperus papyrus) and other aquatic plants. These gardens also had covered boats, and low pergolas whose purpose were to delineate and shade the paths that connected the gardens with their homes. 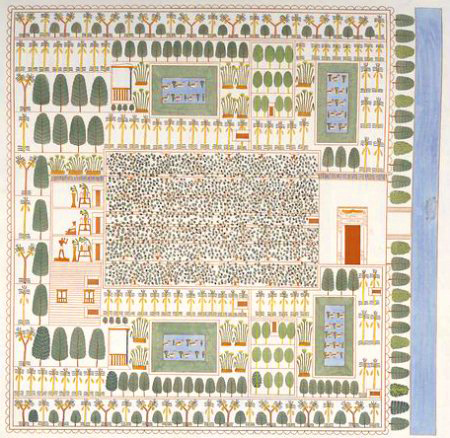 The shape of the construction followed the distribution of the gardening area, and angular shapes were frequent, both rectangular or in the shape of a square. Likewise, flower beds and quadrants were designed by relying on transversal and longitudinal axis, in the shape of a cruise. This technique was then replicated by the gardens of Al-Andalus.

Perspective was achieved through the design of strips surrounding the irrigation channels that crossed crops and connected to the river Nile. It is well known that the Egyptians were outstanding farmers who excelled in the exploitation of their rich and fertile lands, covered in slime from the annual flooding of the river Nile. This civilization lived in harmony with nature, respecting it and profiting from everything it provided. 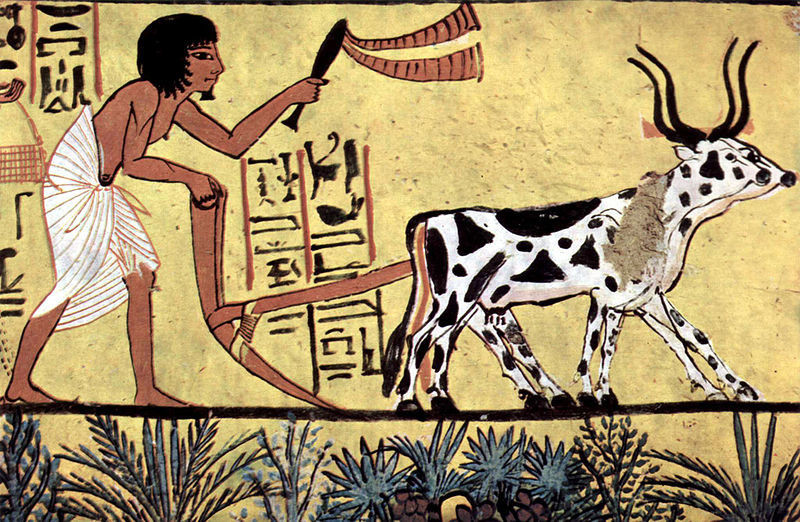 After the expansion of Islam across the Persian, Egyptian and Syrian empires, in the 7th and 8th centuries, Muslims learned irrigation techniques, as well as techniques for the extraction and use of water, very developed in the region at the time, and introduced it to the gardens of Al-Andalus.

What did the Nile’ civilization cultivate?

The Egyptian gardens grew herbs and aromatic plants, medicinal plants and edible plants, such as vegetables and fruit trees, figs, dates, and pomegranates. Botanical species were also a source of raw materials, used for basic products, textiles and everyday tools.

Among Egypt’s most emblematic species we find the date palm (Phoenix dactilyfera). In addition to dates, its sap was used to produce wine, and its fibers were used to make baskets. 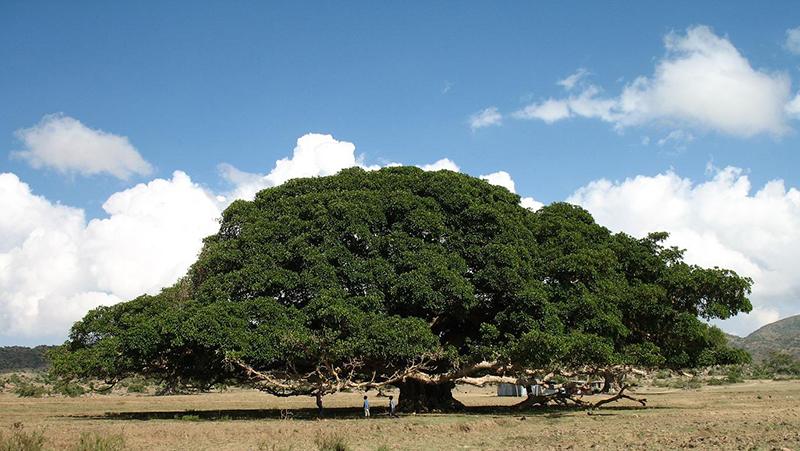 The sycamore fig (Ficus sycomorus), considered the tree of life, and associated with Isis (Osiris’ wife). It was highly praised for its thick shadow and its fruits, the fig, and wood, used for the production of furniture and sarcophagus.

The papyrus (Cyper papyrus) grew abundantly in the Nile’s river banks, on its humid and rich ground. It represented the Lower Egypt and, by drying its stem, the famous papyrus, used for writing, were produced. 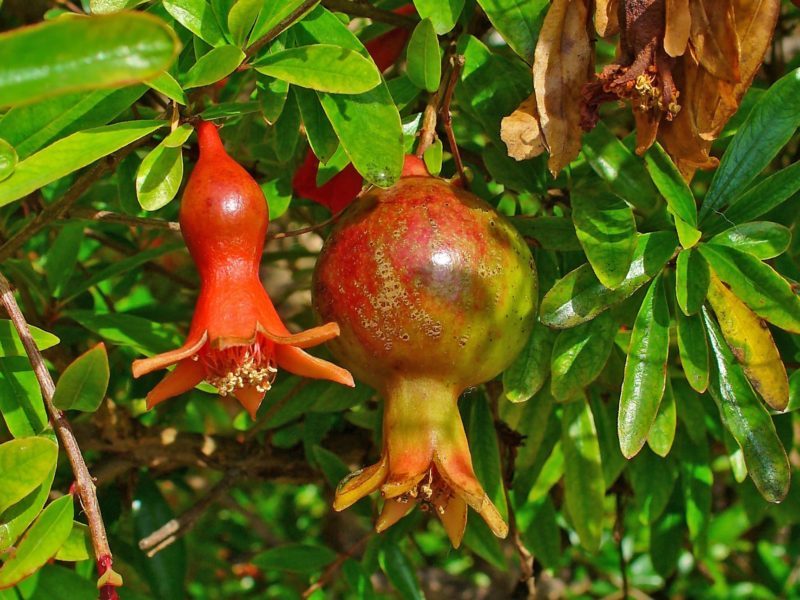 The Egyptian lotus, or blue lotus (Nymphaea caerulea), floated along the Nile, with its beautiful and exceptional flowers. Egyptians loved and venerated the lotus flower, that opens in the morning and closes at night. For them, this flower was a symbol of rebirth. Every part of this plant, its roots, seeds, fruits, and petals, was used for different purposes, for food, esthetic purposes or medicines. Egyptians used them to create flower arrangements that they offered to their gods, and that decorated their temples, palaces, and ceremonies. The lotus flower represents the Upper Egypt. 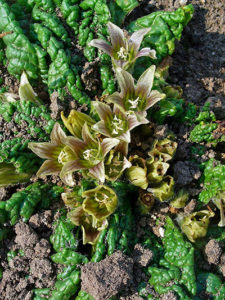 The mandrake (Mandragora officinarum), along with the lotus flower, was one of the main hallucinogenic species, as it contains an alkaloid, the atropine.

The pulp of the dum palm (Hyphaene thebaica) was used for deserts and pastry. Original from the Nile Valley and Sudan, in the tomb of pharaoh Tutankamon were found 8 three thousand-years-old baskets with this fruits. We know that its fruit was used as an offering in funerals. However, Tamarisk fruits (Tamarix nilotica-articulata) were not edible, and were used as medicinal remedies for eye diseases.

The olive tree (Olea europea) was imported from Minor Asia, Syria and Greece, and both the tree and its oil were really useful. Almond trees (Prunus dulcis), which were imported from Palestine, were also used for oil.

Apple trees (Malus sylvestris) could only be afforded by pharaohs and the upper class, as it could only be cultivated in cold weather regions. 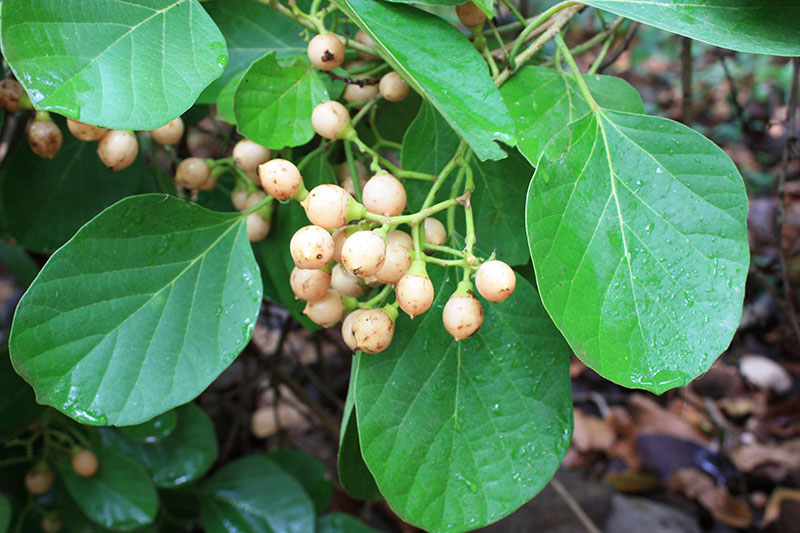 The Egyptian plum (Cordia myxa) was used for sweets, and its fermentation was used to obtain wine. And speaking of wine, the grape vine (Vitis vinífera) was one of their most important species, exploited for fruits and fermented to obtain different types of white and red wine, of high or low quality.

We know the Egyptians grew all these species from the wall paintings found in their tombs, as well as the many papyri found. They are also mentioned by many ancient philosophers, botanists and historians, such as Plato, Herodotus, Theophrastus, Pliny, Dioscorides, and Prospero Alpini.