“The 99.7% of biomass is vegetal, against only the 3%, which are animals. We tend to forget this, but it is essential”, says Santiago Beruete. Under this numbers we find everything the human being needs to know to respect the Earth, in order to stop exploiting it: without it, he wouldn’t exist. When this notion is interiorized, we will be able to speak in terms of equality with the Earth, instead of maintaining an anthropocentric approach. After accepting this idea, we would begin to turn around relation with nature around. This is what Beruete defends in his new book, ‘Verdolatría. La naturaleza nos enseña a ser humanos’ (Verdolatría, the nature teaches us to be humans). Through the book, this professor of Philosophy and Sociology tries to “colonize the collective subconscious, to seduce it”, in order to create an ecological conscience and to prove that it is possible to reconstruct the duality nature-man.

At El Asombrario, we had already interviewed Santiago Beruete when he published his book Jardinosofía, abnd he gave a hundred ideas and a wonderful headline: “A garden leads the way of insubordination and happiness”. We speak again about his new publication, and he opens once again our eyes and mind, by relying in concepts derived from the essence of green:

“Urban orchards have a dimension that transcends the esthetical and ethical, and enters into the political realm. Maye it is the last form of resistance. Plants teach us everything. It can put a plant anywhere and it will humanize. We feel good in the presence of plants. It teaches us ethic and aesthetic lessons. Humbleness, for example.”

You title your book “Verdolatría” (Greenlatry, a play on words between green and idolatry), what is the aim of this term?

I’m going to offer a brief approach. Everything started when I read in the UN’s Observatory that, by the year 2050, the Earth would hold a population of more than 10,000 million people, and that 2/3 would live in the city. Immediately, I thought that the more overpopulated the planet, the stronger the desire to go back to nature. With this idea in mind, I realized that the population of cities have a strong passion for everything related to nature: we worship it, despite of being at war with it. Verdolatría, for me, reflects this ambivalent relation we have with the Earth.

This verdolatría, does it take adopt a transversal level?

Yes, it is a transversal verdolatría. From the counter-urbanization movements to the rise of the vertical gardens industry, from urban architecture to the transformation of wastelands into parks. It is as if humans found inspiration in these contradictions in order to make a twist, an impossible of nature. It is as if nature comes back with the same impetus that we reject it from our lives.

Verdolatría is an attempt to contribute to a narrative in which the human being doesn’t ignore the codependency of all forms of life, and an existence that is not based in exploiting resources, in mass consumption…, a vision relying in the respect of our environment. Verdolatría is an attempt to contribute to that metanarrative. I a way, I join a group of voices that, from different fields, sing the same song. The same which to reconstruct its relation with nature. 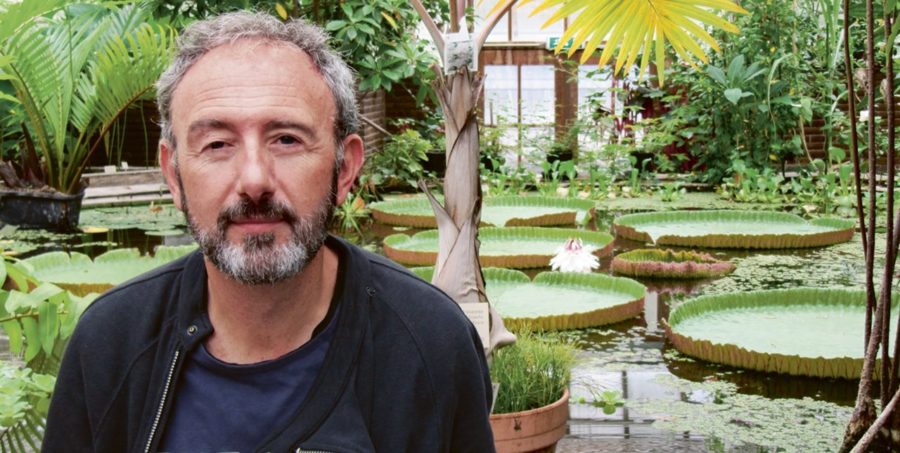 I take on different voices. I use narrative strategies. But, in addition to this, I mix environmentalism with anthropology, philosophy, science…, may different fields, in order to create a new form of expression and a new founding myth.

Among these new forms of expression, you qualify the city’s orchards as authentic acts of rebellion. In your own words, they humanize us.

I always say that to plant is a way of resistance, against the pressure of a society governed by the laws of the market. Urban orchards have that dimension that transcend the ethic and aesthetic, and enter into the political realm. The y might be the last form of resistance. Here we can find real signs of verdolatría.