The posidonia oceanica, better known as Neptune grass or Mediterranean tapeweed, is the oldest species in the biosphere, almost 10,000 years old, as stated by a research from the Spanish National Research Council (CSIC) in 2012.

It is a species of great ecological importance and a key for the sustainability of the Med-O-Med area’s natural heritage. The posidonia is also known as the Mediterranean’s lung, as it is a source of oxygen production (one square mater produces around 10 liters per day) and it absorbs carbon dioxide. Likewise, it produces organic matter, which serves as food for the different species it holds, and protects the coasts by creating a dike and holding beach sand during the winter.

With regards to its location, the posidonia can only be found in the Mediterranean Sea, where it covers around a 3% of the basin, approximately 38,000 km2. It can currently be found from Punta Chullera, in the limit between Malaga and Cadiz (Spain), up to the Dardanelles, which separates Asia from Europe. A small isolated population has also been found in the Marmara Sea, between the Mediterranean Sea and the Black Sea.

Nature and richness of the Posidonia

As for its nature, even though it looks as a seaweed, it is a phanerogam sea plant, which means that, in addition to producing its own food from organic matter and sunlight, it also has stems, flowers and fruits (as opposed to seaweeds). Its leaves take the shape of a ribbon, with a width of 1 cm and a length of around 30 to 120 cm. Many species live in its leaves, including long-living species in its rhizome.

The posidonia contributes to the ecological, environmental and social richness. These plants actively contribute to preserving natural resources, promote biodiversity in the Mediterranean Sea and its fishery resources. Likewise, it protects the beaches and basins from erosion, favoring a sustainable tourism.

The posidonia is also known as the Mediterranean’s lung, as it is a source of oxygen production (one square mater produces around 10 liters per day) and it absorbs carbon dioxide.

The posidonia oceanica is linked to Mediterranean culture. Its uses, since ancient times, are part of our immaterial heritage. 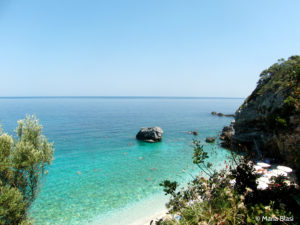 Its scientific name, posidonia, is a reference to Poseidon, Greek God of the Sea. It has had, nonetheless, many name, before the establishment of a systematic nomenclature by Linneo in the 18th century.  In fact, in Spain, it was known as “the seaweed of glass manufacturers”, as it was used as a packing protection for the glass and ceramic arriving from Venice and Rome. Later on, and because of its conservation properties, it was used to wrap the fish sent to Madrid. It was also known as “lijo” in Almeria and “altina” in Catalonia.

Posidonia has also been used for its healing properties, as it is known for healing scar tissue. Fishermen used to take the seaweed grabbed by their nets, macerated in alcohol and applied it to wound as a disinfectant. Furthermore, the Spanish doctor and naturist Andrés Laguna (16th century) registered that its smell could repel parasites. In fact, it seems that the Pope Julio III filled his mattress with it in order to repel bedbugs. In the same sense, its dry and clean leaves were used in pillows to heal those sick of bronchitis.

In Egypt it was also used to heal throat and skin diseases. According to some doctors, it can be an alternative natural remedy for acne and to alleviate the pain produced by varicose veins.

Among its other uses, it has frequently used as a power generator resource, as insulation or food for animals. In the days of heavy sea, people would pick up the dry rhizomes dragged to the beach to use them in many different ways, as wood to heat the food or as a substitute to hay for sun-dried bricks. In fact, it can still be found in the island of Tabarca or in the beach of Calnegre (both located in Spain). As animal food, its fruits were used to feed pigs. These fruits are small green balls, which look like olives and are in fact known olives of the sea. 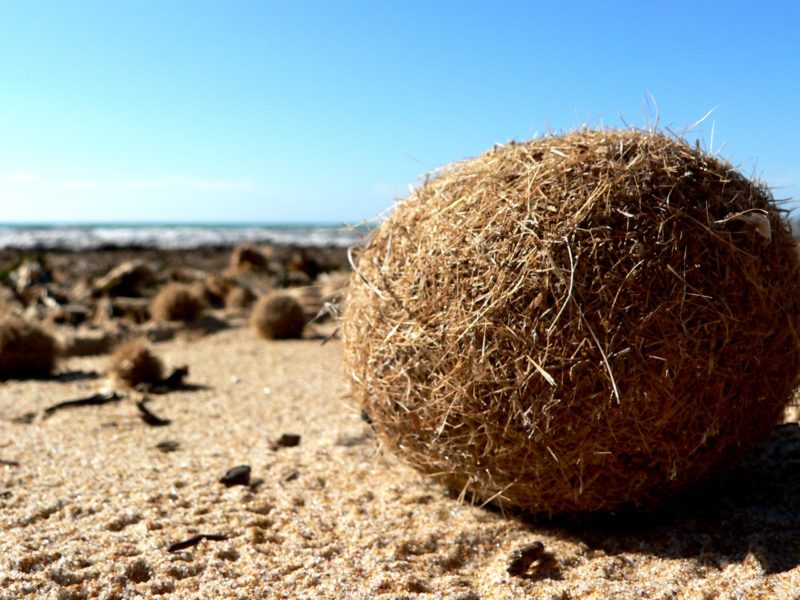 Many recent studies have been developed on the sustainable use of the posidonia, showing its value as an isolator in bio-construction (saving up to a 75% of energy), and as a biofuel.

In 2013, a research carried out by the University of Alicante on the use of posidonia’s waste pointed out at its possible use to create green zones in closed landfills.

That same year, the university presented a new procedure to produce a more resistant concrete out of the posidonia’s waste. Likewise, researchers from the University of Murcia and Santiago de compostela (Spain) have experimented with dried posidonia to use as a substitute to hay for animals. Likewise, due to its high levels of cellulose, it can be used to obtain paper pulp. 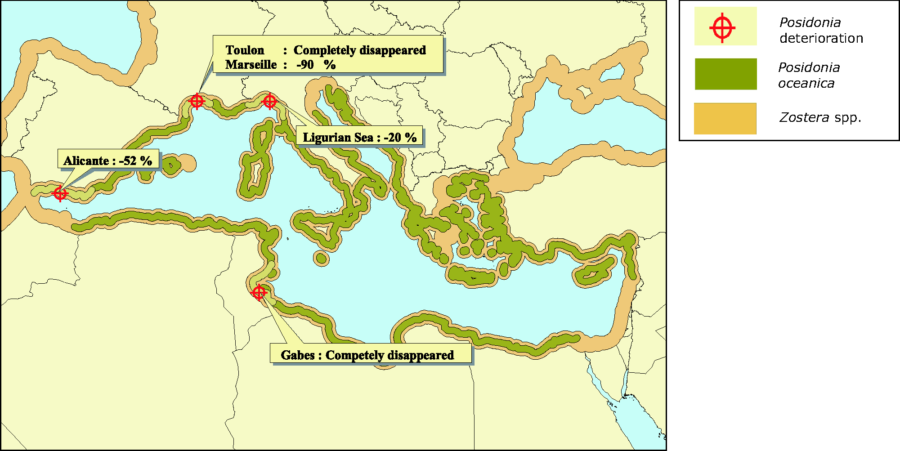 Because of its unique value, posidonia creates an important endemic ecosystem in the Mediterranean. In fact, in order to ensure its preservation, it has been included as a priority habitat in the EU’s decree 92/43/CEE.

In spite of this, it is still a threatened species. In 2014, a team of researchers of the Spanish National Research Council (CSIC) assessed the posidonia’s state since it was first registered, to conclude that, in the last 50 years, the posidonia had reduced its size in a 13 to 38%.