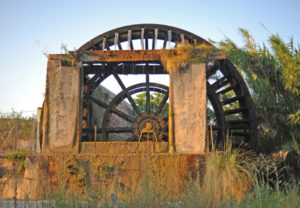 Rural culture developed magnificently during medieval times in the Islamic Mediterranean countries. It has left its mark on many aspects of daily life in the countryside, from Sicily and the Spanish Levant to the Maghreb and the Eastern regions. Al-Andalus was a perfect example. Not only are Arabic words present in every movement, skill and tradition throughout much of Spain, but the actual rural landscape forms part of this heritage. And the same can be said about age-old customs for the distribution and use of water, for sowing, grafting, harvesting and storing, and many of today’s extensive, organic farming methods.

Alcorque, aceña, acequia, alberca, almatriche, almazara and aljofaina are just a few of the Spanish words of Arabic origin that refer to rural culture, and Arabic farming systems such as albuferas (lagoons), olive groves and terraces give the Mediterranean landscape its characteristic appearance.

But what is especially outstanding is the way in which the medieval Moslems managed common natural resources both fairly and sustainably, to use a word that is much in vogue today. This was based on Islamic tradition regarding justice and distribution of goods. The Sacred Book and the Sunna, as well as traditions attributed to the Prophet Mohammed, frequently mention the importance of equity and transparency in distribution and trade.

The following ayah, posted at the entrance to Harvard University, lays the foundations for an unmistakable concept of social justice …:

O you who have believed, be persistently standing firm in justice, witnesses for Allah, even if it be against yourselves or parents and relatives. Whether one is rich or poor, Allah is more worthy of both. So follow not [personal] inclination, lest you not be just. And if you distort [your testimony] or refuse [to give it], then indeed Allah is ever, with what you do, Acquainted. (Qur’an, 4-134).

Though in short supply today, solidarity was much appreciated in the Moslem world during the early centuries. The fourth Caliph of Islam, Omar Ibn el-Jatab, stated that if a person died from poverty, the inhabitants of the town were required to make up for his death as if they had all been guilty of his murder. 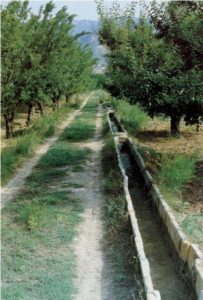 Natural resources had to be fairly shared throughout the community. As the hadith states, “Moslems share three things: water, pastures and fire”. And day labourers taken on for specific tasks had to be paid immediately, as stipulated by the Prophet of Islam, who ordered that their wage should be paid “before their sweat dries”. On the subject of food, it is of note that the famous Spanish saying, still in use today fortunately, “where three can eat, so can four”, comes in its literal form from a well-known hadith.

Also of interest is the close relationship our forebears had with nature. For Moslems, tending the land is an amana, a responsibility, because during their time on earth they are mere usufructuaries, and are obliged to use the land with moderation and balance. In Islam, work in itself is an act of adoration, and if the work involves cultivating the land, the benefit multiplies. There is a hadith that states, “No Moslem plants or sows something, so that a bird, a man or an animal can eat from it, without there being a benefit for him”.

A person who farmed land in the public domain or that belonged to no-one, had a special right over it, as stipulated by the Prophet in the 7th century, many centuries before the famous sentence by Emiliano Zapata, “Land belongs to whoever works it”.

But, perhaps, where regulation and sharing were most important was in the use of water. Al-Andalus was again an example, though not the only one. There were public persons such as the sahib al-saqiya, the water sharer, or the qada al–miyah (water mayor), and the official al-amin al-maa. The term amin in Arabic, «the person who is trustworthy», came to be used in irrigated farming in the Christian parts of Spain, in the form alamín in Castile, and alamí in Valencia.

This is just a brief outline, but it gives an idea of the moral and ethical values that, in general, governed the rural life of Moslems in medieval times.