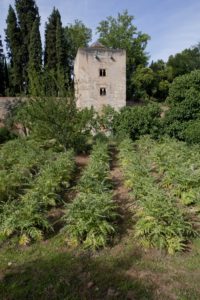 This morning we walk around the Generalife. We will share a day of work with Alhambra’s gardeners, so they can tell us curiosities about its orchards. Do you know they haven’t stop producing since the Middle Age?

The Generalife was the country house, or palate rustic property that in the late 13th century, the Sultan Muhammed II al-Faqih ordered to build. It is located in the higher area of the Alhambra, surrounded by orchards tilled with the same cropping system since the 15th century. This system has been passed from generation to generation, from parents to sons.

As we can read from the Alhambra’s official guidebook, apart from being a recreational property, the Generalife was assigned for the royal agricultural production. There were cultivated garden products, fruit trees and grasses for the cattle. 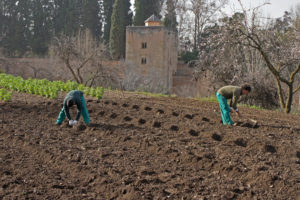 When we begin our tour, the first visitors are already entering the Monumental enclosure. It is 3ºC. It is cold, but the wintry freeze captures us. It is lovely to walk and to notice new smells from the green Alhambra.

Our gardeners inform us that they have been working in the orchards for several months. They have already trimmed every fruit tree and have added the organic matter to the earth. Everything is ready to plow the land and plant the seeds, which will include “Reina Mora” field beans, artichokes, “Alhambra”, and peas. There is also Castilian garlic… Now we know what these crops are! 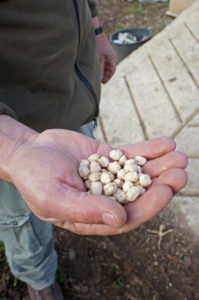 Bad news: this year, the pigeons have wreaked havoc in the orchards and eaten almost all the peas. They love them. As a consequence, they have planted chickpeas instead. We hope we have good crops of chickpeas, eggplants and pepper soon!

The working area of the Generalife’s orchards includes more than 5,5 hectares of paratas (a flat area carved at a slope and destined to plant), ecologically grown and in which the bigger mechanical mean used is a motorized plough.

The days in which, taken by the rain, the orchards are unworkable, the gardeners spend the day trimming the trees, which occupy most of the slope of the Orchard “La Mercería”. Many of those trees have been lopped using a medieval practice known as “trasmocho“, a special kind of trimming that can be carried out in many ways and that affects different type of trees, depending on the species, shape and age. 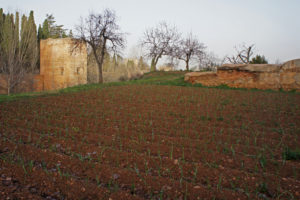 Also interesting are the names of the orchards: Grande, Colorada, Mercería and Fuente Peña, which, with more or less frequency, have been cultivated since the medieval times. In them, as well as in the surrounding fields, crops were cultivated for the supply of the royal court. These included horticultural species such as chards, leeks, carrots, cabbages, cauliflower, artichokes, beans, lettuce, radish, eggplants, pumpkins, cucumbers, onions, green beans… And also fruit trees as pomegranate trees, fig trees, grapevines, olive trees, apple trees, pears, quince trees, among others.

Now we know a bit more of this fertile lands. Thanks to our gardeners for their work. Always outdoors, with the rain, the cold, the snow, the heat… Fascinating.