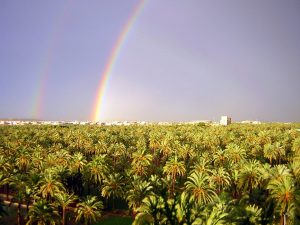 The palm tree is a constant in the landscape of Southeastern Spain, coming from the Andalusian period when the palm trees were bordering the canals and delimiting plots resulting in a microclimate which allows the development of the irrigated agriculture characteristic of the Oasis. The palm groves of Southeastern Spain are a landscape formation which covers the regions of Alicante, Murcia and Almería. Thos palm groves present a value surpassing the basic landscape conditions. They are located in the old commercial route of Shark-al Andalus, they are the witnesses of the agricultural revolution known as “Green revolution” developed in Al-Andalus.

Elche is the third biggest city in the Region of Valencia, having a soft climate and beautiful surroundings.

Elche was the place chosen by the Arabs to develop the agricultural and irrigation techniques, learned of others peoples of Middle-East, so they were able to transform a deserted place into a prosperous oasis full of life: The Palm Grove of Elche, a World Heritage Oasis.

You can click in the link above and learn more about it in the : The Culture of Oasis Blog, containing information as well as the last news regarding the Palm Grove of Elche, updated by Mercedes Aranzueque who is already a member of the Med-O-Med program