The Salum area is part of the western Mediterranean coastal region of Egypt, extending 600 km between Alexandria in the east to the Libyan border in the west. This area, including the Gulf of Salum, has been identified by Egypt as the most appropriate site to establish a protected area in order to maximize conservation of a representative cross section of the region’s natural resources. The region around Salum is of urgent conservation priority because of its high natural value, and also because it is the only section of the western Mediterranean coast of Egypt which is still fairly intact and undeveloped. The conservation of natural coastlines, unique habitats and wildlife will help make these resources a significant asset for future generations and for the tourism industry.

The region around Salum is of urgent conservation priority because of its high natural value, and also because it is the only section of the western Mediterranean coast of Egypt which is still fairly intact and undeveloped.

To give an understanding of their fragile marine resource, 370 students of Salum in the age of 12 to 13 years were invited to an education outdoor event on the 17th February, 2008. This “Nature Day” gave the students the opportunity to approach open-air their natural environment and its issues in a dynamic and hands-on manner. For the first time, twenty-three teachers and the school board faced an innovative concept of outdoor, nature-based learning.

On the 27th January, 2008, a workshop to introduce Marine Protected Areas and the need to protect natural resources, and to enhance discussions between different stakeholders was organized. Seventy people of Salum attended it. The event brought together representatives from the local and regional government, of the coast guard, of the national security, as well as Bedouin chiefs, resource users and influential citizens.

A campaign for the protection of the Mediterranean 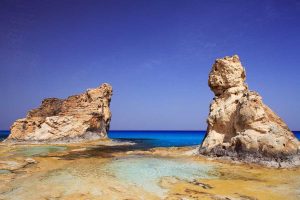 These two events were part of a public awareness and information dissemination campaign implemented by Nature Conservation Egypt (NCE), a local NGO, in partnership with the Nature Conservation Sector (NCS) of Egyptian Environmental Affairs Agency (EEAA) and the Wadi Educational Centre. The aim of this campaign was to sensitize the local community and the relevant authorities of Salum to the issues and the potential importance of marine protected areas. These initiatives were very well received by the participants and the authorities. Important steps were identified for the future such as  the analysis of the potential of a community management mechanism for the administration of Salum’s intended marine protected area and the coordination of a teacher training programme in Salum’ dealing with outdoor education.

This campaign was part of the project titled “Supporting Egypt in Developing Marine Protected Areas on the Mediterranean Coast: Salum as a Potential Site for Marine Protected Area Designation”, initiated in 2006 by the IUCN Centre for Mediterranean Cooperation in collaboration with the EEAA, the University of Cairo, and National Institute of Oceanography and Fisheries.