The following are just some of the species which were imported or consolidated and the routes they travelled until they reached the Iberian Peninsula: 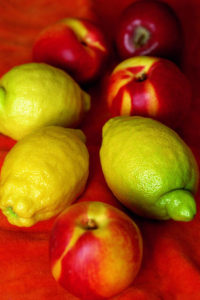 The first citrus fruit to reach the Iberian peninsula was the citron, probably known in al-Ándalus before the 9th century. Limes, lemons, bitter orange and grapefruit arrived early in the 11th century and became consolidated over subsequent centuries. The origin of almost all of the above was Indonesia and China, but they reached the Mediterranean after being domesticated and hybridised in India, Persia and the Persian Gulf over the two preceding millennia.

Aubergine (Solanum melongena), originally from India and intensively grown in Persia, was introduced to Egypt and the Maghreb, and then reached al-Ándalus at the beginning of the 10th century.

Spinach (Spinacia oleracea) originally grew in Sassanid Persia (currently Afghanistan) and arrived during the 11th century, brought by the Arabs.

Yellow nutsedge (Cyperus esculentus) was brought to Andalucía from Kufa, Iraq, and was apparently acclimatised in Valencia.

Melon and watermelon originated in Sindh (Pakistan) and reached the Iberian Peninsula through Iraq and Syria.

The North African desert regions are the source of the plant known as bitter apple (Citrullus colocynthis), introduced to the peninsula by the Arabs for its medicinal applications.

Cultivation of the artichoke (Cynara scolymus) started in the Mediterranean region and is closely linked to the well-known cardoon grown in Roman Hispania Baetica (Cynara carduncullus). It extended throughout all al-Ándalus with great success, probably brought from North Africa.

From the book: Gardens of Al-Andalus, Islamic Culture Foundation